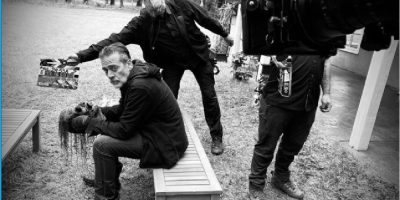 “No Doubt’s” bassist Tony Kanal is accused of hiding Heath Ledger in his garage.

Someone has reportedly been popping by Kanal’s Los Angeles house, insisting the late Ledger is alive and bunking in the home.

Since January, the trespasser has harassed the bassist and his family, making unannounced and unwelcome visits to his home, and even hopped over the gate.

Kanal bought the house from Ledger in 2005, three years before the actor’s death.

A restraining order had been issued against the trespasser, while a hearing is scheduled for later this month.

Shooting Wraps on “The Walking Dead”

That’s a wrap on “The Walking Dead.”

The final episode of season 11 finished taping, wrapping up over a decade worth of storylines of survival, redemption, and blood-thirsty zombies.

Jeffrey Dean Morgan, who’s played Negan since season six, shared a picture of his final day on set holding the head of a walker.

Even though the original show is done, several more spinoffs are coming.

Morgan, alongside costar Lauren Cohen, will soon film “Isle of The Dead,” which sees the two unlikely allies battle a walker filled Manhattan.

It’s a funny behind-the-scenes shot showing how much the characters have changed.

Reedus and longtime costar Melissa McBride are also getting their own spinoff.

Kanye West won’t be at Coachella

Kanye West pulled out of Coachella just a few weeks before opening weekend. He was scheduled to headline the closing night of the two-weekend festival that runs April 15-17 and April 22-24.

According to Variety, reps didn’t give an immediate reason for the cancellation; but a source revealed that he hadn’t rehearsed or prepared for the appearance.

The news isn’t surprising as West has had a rocky several months with his unpredictable and concerning online behaviour.