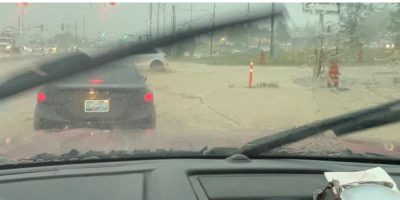 It never rains, but it pours.

Thunderstorms roared across portions of Simcoe County on Sunday evening bringing torrential rain, and causing some streets to be flooded.

Environment Canada said upwards of 85 to 100 mm of rain fell on sections of Barrie, while forecasters warned of between 100 and 120 mm of rain for the Collingwood area.

In Barrie, a number of streets were flooded including Tiffin Street near Anne, as well as Essa Road in the area of Highway 400 and Fairview Road.

Barrie Police and the OPP closed the northbound exit ramp from Highway 400 to Essa Road and the ramp to the 400 northbound from Essa so crews could repair any damage caused by the water.

Forecasters say another round of showers and thunderstorms is possible on Monday.

Banner image: Heavy rain flooded Essa Road at Highway 400, at the on and off ramp near Fairview Road. Picture by Stephanie Johnson, Barrie Concerned Citizens