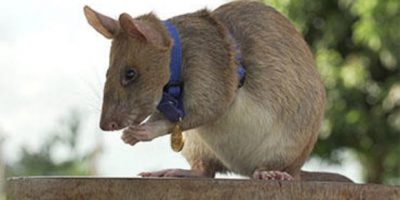 Magawa, an African pouched rat, is retiring at the end of June after successfully tracking down dozens of landmines in Cambodia and potentially saving many lives, the organization that trained him announced Friday.

APOPO, which stands for Anti-Persoonsmijnen Ontmijnende Product Ontwikkeling in Dutch, or Anti-Personnel Landmines Removal Product Development in English, is a non-profit based in Tanzania that trained Magawa to find landmines. According to the organization, Magawa found 71 landmines and 38 items of unexploded ordnance in his five-year career. To date, he helped clear more than 225,000 square meters of land – the size of nearly 32 soccer fields.

“Magawa’s performance has been unbeaten, and I have been proud to work side-by-side with him,” his handler Malen said in a news release. “He is small but he has helped save many lives allowing us to return much-needed safe land back to our people as quickly and cost-effectively as possible. But he is slowing down, and we need to respect his needs.”

Magawa’s efforts earned him a a gold medal last year from the People’s Dispensary for Sick Animals (PDSA), a veterinary charity in the United Kingdom, making him the first rodent in the nonprofit’s 77-year history to earn the distinction. PDSA Director General Jan McLoughlin praised Magawa for his work, calling him a “hero rat” in a virtual presentation of the medal.

APOPO has been preparing for the end of Magawa’s run by bringing in a fresh team of rodent recruits. Last week, a group of 20 newly trained landmine detection rats were tested by the Cambodian Mine Action Center and “passed with flying colors,” the organization said.

The rats, who the organization refers to as HeroRATS, are the only animals that can safely detect landmines because of their light weight and sense of smell. They’re also much faster than people at finding them — PDSA said Magawa can search an area of a tennis court in 30 minutes, which could take a human with a metal detector up to four days.

More than 60 million people living in 59 countries from Cambodia to Zimbabwe live in daily fear because of landmines left behind in previous conflicts, according to APOPO. With over 40,000 amputees, Cambodia has the highest ratio of mine amputees per capita in the world. However, there has been progress. In 2020 alone, APOPO Cambodia cleared more than 4 million square feet of land.