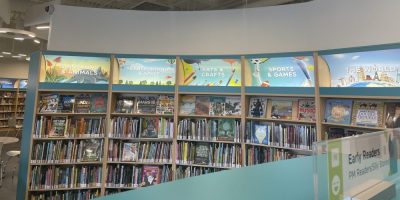 Remember the anticipation you felt opening the first book you borrowed from the library?

That’s how residents living near the new Holly Branch (Essa Road and Mapleton Avenue) of the Barrie Public Library (BPL) are feeling. One, in particular, CEO Lauren Jessop told Barrie 360, a little boy, “who wants to sleep outside on the sidewalk tonight so that he can be the first one in.”

Jessop is thrilled to be able to make library resources accessible to more residents. And while the Holly branch is smaller, compared to the main branch downtown, she assures it has as much to offer, “To be honest, it is pretty similar to Painswick. The only difference really is the size. So, most of the stuff that you find at Painswick, you find here, and anything that you can’t find here we can bring from downtown or Painswick.”

And there is a lot to take advantage of.

“We don’t have encyclopedias and such … we don’t keep that stuff anymore. But what we do have is popular materials, research materials, things that are in pop culture that people are wanting to learn about and know about. And, you know, a large focus on indigenous authors and making sure that people have access to those resources to educate themselves.”

There are audiobooks and e-books that can be downloaded, Zoom calls that can be made, tables and chairs for people to sit in and work at.

And did you know borrowing is not limited to books, DVDs, and video games? The library also lends such things as fishing rods, musical instruments, snowshoes, and cognitive care kits. Said Jessop, “One of our biggest hurdles, is getting the word out about what we do have. We have so much, and [are] always adding new things. So, like you said, we have the ‘library of things’.”

The new branch, which opens this morning (Aug. 5), is the third location in Barrie, after the Painswick branch and the main library downtown. But Jessop says it’s still not enough for a city the size of Barrie.

“We’re pretty under-resourced, but we’re working on it … adding little bits of square footage, here and there. There is a bit of a standard of point-seven square feet per capita. And we’re not even half of that.”

Jessop’s wish list, and a master facilities plan, include three more locations. Plans are already in the works for libraries to be included in community centres in two neighbourhoods being built in the south end. Jessop is also hoping funding can be found for a branch in the north end.