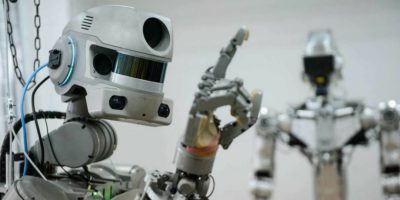 In a critical test before using an upgraded booster to launch crews to the International Space Station, the Russians launched an unpiloted Soyuz crew ferry ship from Kazakhstan late Wednesday. It had a humanoid robot known as the Skybot F-850 strapped into the commander’s seat.

Carrying sensors to measure launch vibrations, accelerations and other environmental factors, the robot will be brought inside the station after docking Saturday for five days of engineering tests. It then will be strapped back in for a return to Earth on Sept. 6.

But the primary goal of the flight is to verify the suitability of the upgraded Soyuz-2.1a booster to launch astronauts and cosmonauts to the station and to check out a variety of Soyuz upgrades. According to initial reports from Russian flight controllers, it did just that, chalking up a flawless climb to space.

“Reports from the Russian mission control center indicate the 2.1a booster did its job perfectly, placing the Soyuz MS-14 into a perfect orbit on its trajectory toward the International Space Station,” said Rob Navias, NASA launch commentator at the Johnson Space Center in Houston.

The 2.1a rocket already had been successfully used to launch unpiloted Progress cargo ships, but one of those suffered a malfunction in 2015. While the problem was resolved, the Russians decided to stage one flight with a Soyuz crew ship as a final test.

The next Soyuz crew — commander Oleg Skripochka, NASA Flight engineer Jessica Meir and United Arab Emirates guest cosmonaut Hazzaa Ali Almansoori — is scheduled for launch Sept. 25 aboard an older-style Soyuz-FG booster. That will be the final crew launch off the pad Yuri Gagarin used — Site 1 — at the dawn of the space age.

If all goes well, the Russians will begin launching crews aboard the Soyuz-2.1a booster early next year from site 31, the pad used Wednesday, at the Baikonur Cosmodrome.

The test flight got underway at 11:38 p.m. EDT (8:38 a.m. Thursday local time) when the rocket’s first-stage engines rumbled to life with a familiar burst of flaming exhaust. An instant later, the rocket began climbing away from its firing stand, launching directly into the plane of the space station’s orbit.

The launching marked the first unpiloted flight of a Soyuz spacecraft in 33 years.

The climb to space appeared to go smoothly and eight minutes and 45 seconds after liftoff, the booster’s third stage engine shut down and the Soyuz MS-14/60S spacecraft separated to fly on its own. A few moments later, the ferry ship’s two solar arrays and navigation antennas unfolded and locked in place.

In-cabin video showed the Skybot moving its head up, then to the right and left as if looking around the cockpit. It was, presumably, carrying out commands beamed up from the Russian mission control center.

The FEDOR robots were developed by the Russian Foundation for Advanced Research Projects. The remotely operated robots originally were developed for rescue operations, but videos posted on Russian websites show the humanoid machines carrying out relatively complex tasks ranging from driving a car to shooting automatic weapons. Deputy Prime Minister Dmitry Rogozin said in a widely reported tweet, “We are not creating a terminator but artificial intelligence which will have a great practical importance in various fields.” Cosmonaut Alexander Skvortsov will work with the Skybot during five days of tests inside the space station, using virtual reality-type equipment to remotely operate the robot. Alexander Bloshenko, a Russian space agency science adviser, said more sophisticated versions could one day be used for hazardous operations outside a spacecraft. In any case, the Soyuz flight plan called for a series of remotely programmed rendezvous rocket firings to catch up with the space station, setting up an autonomous docking at the upper Poisk module around 1:30 a.m. Saturday. The ferry ship is scheduled to undock from the station on Sept. 6, landing on the steppe of Kazakhstan to wrap up its mission.