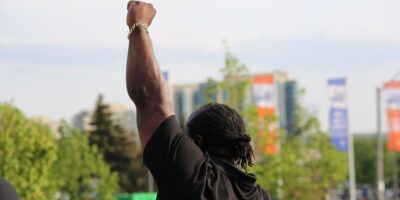 It is said protesters protest and rioters riot. There were only protesters in downtown Barrie Thursday evening.

Demonstrators began gathering at Barrie City Hall well before the start time of 5 p.m. armed with signs and voices. Dozens of people quickly swelled to hundreds before the whole crowd took to the streets.

Protesters marched from City Hall south along Mulcaster Street and across Simcoe Street as police guided downtown traffic around the march. The demonstrators flooded Meridian Place and spilled across the rainbow crosswalk to Heritage Park.

While the gathering left little room for physical distancing amid the COVID-19 pandemic, the vast majority in attendance were wearing face masks. Donations of non-medical masks were made before the demonstration began and distributed as necessary. Police officers were seen passing out masks.

Passionate speeches were given by several in attendance, calling on allies to name racism when it is seen, be it an off-the-cuff comment or a racist joke. “And for the love of God, stop saying the N-word,” one speaker yelled from the stage to a thunder of applause.

“I feel emotional. I feel moved. I think the voices that were here were various and different and needed,” said attendee Michele Newton of Making Change Across Simcoe County, who marched alongside her daughter. “The people that were here heard what was being said, they were really listening.”

“When you watch it on TV, it doesn’t seem real,” continued Newton. “Seeing all these people come together to listen to stories of struggle and stories, also, of how we can build hope. It’s very powerful. Very, very powerful today.”

The demonstration ended with eight minutes and 46 seconds of silence from the crowd of hundreds, the length of time a Minnesota police officer kneeled on George Floyd’s neck before he died.

As peacefully as it began, the demonstration came to an end shortly after 7 o’clock as planned. As of Thursday evening, police laid no charges, and no COVID-19-related offences notices were issued.