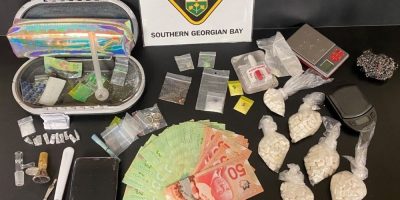 A call from the public about an erratic driver on Highway 400 turned out to be a big catch for Southern Georgian Bay OPP.

On Tuesday afternoon, police were alerted about the driver, who was reported to be in the area of South Gibson Lake Road in Georgian Bay Township.

A short time later, a vehicle was pulled over and police began an impaired driving investigation. This led to the recovery of suspected meth and opioids along with some Canadian currency.

Police charged a 33-year-old Kirkland Lake man with several drug-related offences and one charge of possession of property obtained by crime under $5,000.

The vehicle the man was driving was impounded for seven days and the accused’s driver’s licence was suspended for 90 days.

The suspect was released into the custody of another police service to continue their ongoing investigation.