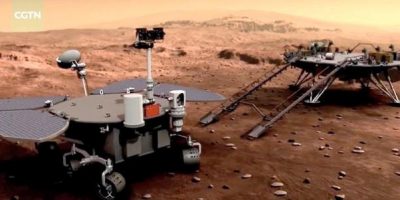 China’s Zhurong Mars rover, mounted atop a rocket-powered lander, dropped away from its orbiting Tianwen-1 mothership Friday and descended to touchdown on the red planet, official news agencies confirmed, a superpower feat that highlights the growing prowess of the Chinese space program.

The China National Space Administration confirmed Zhurong, named after the god of fire in Chinese mythology, landed on a broad plain known as Utopia Planitia Friday at 7:18 p.m. EDT (7:18 a.m. Saturday Beijing time) after a fiery plunge through the thin martian atmosphere.

Thomas Zurbuchen, NASA’s director of space science at NASA Headquarters, congratulated China on the successful landing, tweeting, “together with the global science community, I look forward to the important contributions this mission will make to humanity’s understanding of the Red Planet.”

Like NASA’s Perseverance rover before it, Zhurong relied on a heat shield and protective aeroshell to protect it from the extreme temperatures generated after hitting the atmosphere at nearly three miles per second. Once through the plasma heating zone, a large parachute presumably unfurled as planned, dramatically slowing the craft to sub-sonic velocities.

Finally, about seven minutes after hitting the atmosphere, the lander was programmed to fall free of its parachute, firing small rocket engines for a powered descent to the surface.

After extensive tests and checkout — China has not revealed the rover’s schedule — two ramps will unfurl, allowing the six-wheel rover to roll off the lander’s upper deck and down onto the surface for at least three months of robotic exploration.

“Tianwen-1 is going to orbit, land and release a rover all on the very first try,” mission managers wrote before launch in the journal Nature Astronomy. “No planetary missions have ever been implemented in this way. If successful, it would signify a major technical breakthrough.”

The nuclear-powered Perseverance is NASA’s ninth and most technologically advanced Mars lander to successfully reach the surface, carrying a suite of sophisticated cameras, spectrometers and other instruments designed to search for signs of past microbial life.

It also carries a complex sample caching mechanism to collect rock and soil samples for eventual return to Earth and deployed a small helicopter — Ingenuity — that has carried out five successful test flights to date.

Tianwen-1 is the first all-Chinese mission to the red planet and its most sophisticated interplanetary probe to date. While not in the same league with Perseverance, the combination of a powerful orbiter and surface rover for China’s first attempt at Mars is a harbinger of more ambitious missions to come.

Only two other nations — the United States and the Soviet Union — have ever landed spacecraft on Mars. NASA’s record stands at nine successful landings in 10 attempts while Russia endured eight lander failures with just one partial success.

“There is certainly life on Mars! We’re the life of the party!” the Chinese space agency tweeted.

There is certainly life on #Mars! We’re the life of the party! #Zhurong #Tianwen1 #CNSA @CNSA_en pic.twitter.com/cC8pZVmyVt

The Tianwen-1 mother ship, which will remain in orbit around the martian poles throughout its two-year mission, is equipped with seven instruments, including high- and medium-resolution cameras; a ground-penetrating radar; a mineralogy spectrometer; a magnetometer; and two charged particle detectors.

The 530-pound rover, roughly the size of NASA’s Spirit and Opportunity rovers that landed on Mars in 2004, is equipped with six instruments, including a multi-spectral camera, a terrain camera, a ground-penetrating radar, magnetic field detector, meteorology sensors and others.

As with Perseverance, Chinese flight controllers will not be able to operate the Zhurong rover in realtime. Mars and Earth are currently separated by 198 million miles and radio signals, traveling at 186,000 miles per second, take nearly 18 minutes to cross the gulf.

Instead, flight controllers will uplink commands for the rover and then await the results, relayed back to Earth through the Tianwen-1 orbiter.

China has successfully sent two rovers to the moon, including one that landed on the never-before-visited far side. An attempt to send an orbiter to Mars atop a Russian rocket in 2011 ended in failure when the Zenit booster malfunctioned.