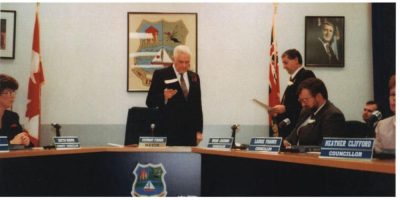 The Town of Innisfil will fly its flag at half-mast from Thursday, August 4 to Tuesday, August 9, 2022 to honour former Innisfil Mayor Stewart Fisher (1992-1997) who passed away on August 2, 2022. Mr. Fisher was a prominent member of the Town and was involved in many community organizations and events. In addition to his role as mayor, Mr. Fisher also served as Chief of Police for the Township of Innisfil, Warden of Simcoe County and Chairman of the Simcoe County School Board. The Town is grateful to Mr. Fisher for his many contributions including his generous donation to the Stewart and Betty Fisher Family Community Room in the Rizzardo Health & Wellness Centre.

Flags at Town Hall are flying at half-mast now until August 9 to honour the passing of former Innisfil Mayor Stewart Fisher. Mr. Fisher was a prominent member of the #Innisfil community and we're grateful for his many contributions.

“Stewart Fisher was the mayor when I first joined Innisfil Town Council and I learned many valuable lessons from him which I carry forward to this day,” says Innisfil Mayor Lynn Dollin. “His passing is a loss to Innisfil, but his legacy will live on through his generosity and dedication to his community.”