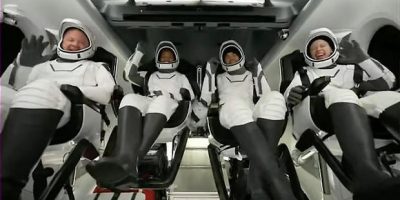 The Inspiration4 crew wrapped up the first all-civilian privately-funded trip to orbit and plunged back to Earth on Saturday, dropping out of a hazy sky for a ghostly early evening splashdown in the Atlantic Ocean near Cape Canaveral, Florida.

“Inspiration4, on behalf of SpaceX, welcome home to planet Earth,” a SpaceX flight controller radioed. “Your mission has shown the world that space is for all of us and that everyday people can make extraordinary impacts on the world around them. Thank you for sharing your leadership, hope, generosity and prosperity, and congratulations on your incredible journey.”

Replied commander Jared Isaacman, the billionaire who chartered the flight in part to raise $200 million for the St. Jude Children’s Research Hospital: “That was a heck of a ride for us. We’re just getting started.”

Recovery crews reached the spacecraft within minutes to carry out a quick inspection and to connect cables allowing the capsule to be hauled aboard SpaceX’s “Go Searcher” support ship.

Flight surgeons and company technicians were standing by to open the Crew Dragon’s hatch to help the four passengers out of the capsule for initial medical checks and phone calls to friends and family on shore.

Not much help was needed. All four crew members were in obviously high spirits, enthusiastically waving and smiling as they walked away from their spacecraft, looking fit despite three days in weightlessness.

“The crew is in great spirits, they’re having a blast and everyone’s looking forward to reuniting with their families,” Scott “Kidd” Poteet, an Inspiration4 mission director, said from the Go Searcher in a post-splashdown teleconference with reporters.

Isaacman, Sian Proctor, Chris Sembroski and Hayley Arceneaux were flown by helicopter from the recovery ship back to the Kennedy Space Center for private reunions and post-flight celebration.

“I really believe this mission will be looked at as the first mission at the opening of really the second space age, where space travel becomes much more accessible to average men and women across the world,” he said.

“It’s about opening up space, but it’s also about looking back and making sure that we make a difference back here on Earth. … We’re at $160 million raised for St. Jude’s to cure childhood cancer. We’d encourage everybody to continue that trend and meet our goal of $200 million.”

SpaceX founder Elon Musk apparently agreed. A few hours after the Crew Dragon’s return, he announced in a tweet to the crew members, the Inspiration4 team and St. Jude that he, too, would contribute to the fund raising effort, pushing it over the $200 million goal.

Isaacman and his fellow crew members began their final day in orbit at 12:30 p.m. A few hours later, they donned their futuristic pressure suits and strapped in while flight controllers at SpaceX headquarters in Hawthorne, California, rigged the ship for entry.

Moments before a critical rocket firing to drop the ship out of orbit, television views from inside the Crew Dragon showed Sembroski watching a movie on a computer tablet attached to the left leg of his pressure suit.In any case, the Crew Dragon’s flight computer fired the capsule’s Draco braking rockets for 15 minutes starting at 6:17 p.m. EDT, slowing the capsule enough to drop the far side of the orbit into the atmosphere for a southwest-to-northeast descent across Central America and the Florida peninsula.

After a fiery plunge back into the dense lower atmosphere, the capsule streaked high above Florida’s west coast south of Sarasota and quickly shot across the state toward the Kennedy Space Center, rattling windows with sonic booms as it crossed above the east coast and out over the Atlantic Ocean.

A few minutes later, small drogue chutes deployed to stabilize the capsule followed by the four main parachutes, which inflated in stages and quickly slowed the craft for the final few minutes of the mission.

Isaacman, the CEO of a payment processing company and an accomplished jet pilot, chartered the flight as part of a personal drive to raise $200 million for St. Jude Children’s Research Hospital. He kicked in the first $100 million himself and set up a donations program that has pulled in $50 million to date.

Arceneaux is a childhood cancer survivor who was treated at St. Jude and is now a physician assistant at the famed research center. Proctor, a one-time astronaut finalist, educator and artist, and Sembroski, an aerospace engineer, were selected as part of an on-line contest.

All four spent six months training for the Inspiration4 flight and all four appeared to be having the time of their lives in orbit as seen in the few glimpses seen by the public during the mission. A more extensive look at the flight will be presented as part of an on-going Netflix documentary.

“They were rock stars from the very beginning,” Poteet said. “And that’s a testament to SpaceX and the training that they went through over the last six-plus months, in addition to some of the additional training that we came up with to make sure they’re fully prepared.”

Isaacman, he said, was committed to “a 100% successful mission, and thus far it has been.”

The mission began at 8:02 p.m. Wednesday when the crew’s Falcon 9 rocket roared to life and shot away from historic pad 39A at the Kennedy Space Center. The booster propelled the Crew Dragon capsule into a 365-mile-high orbit some 100 miles higher than the International Space Station.

During their three days in space, Isaacman and company collected medical data to chart their adaptation to weightlessness, chatted with patients at St. Jude, gave the public a televised tour of their capsule and showed off the hemispheric dome SpaceX installed to provide spectacular 360-degree views of Earth and space.

“Tom was obviously super excited, offering us a viewing of ‘Top Gun 2,'” Poteet said. “Us being aviation enthusiasts, we’re pretty excited about that one, for sure.”

While about half the people who fly in space suffer from space motion sickness during their first few days in weightlessness, the Inspiration4 crew appeared cheerful and healthy in the video clips downlinked during the mission.

“They’ve been absolute rock stars, and we couldn’t be prouder,” Poteet said.

Asked if the crew had to deal with any technical problems during the flight, he said there were a few “minor challenges” but nothing of any significance.

“For example, there was a minor waste management issue that the crew and mission control were required to troubleshoot,” he said, not adding any details. “But honestly, this did not impact the mission. … It was a huge success. To quote SpaceX, it was one of the most successful missions thus far that they’ve been able to execute. So overall, we couldn’t be happier.”

Isaacman, Proctor, Sembroski and Arceneaux became the 588th, 589th, 590th and 591st individuals to fly in space, pushing the U.S. total to 311 men and 56 women. They were the 25th through 28th people to fly in space on a purely commercial basis and the first privately-funded, non-government crew to make it into orbit. 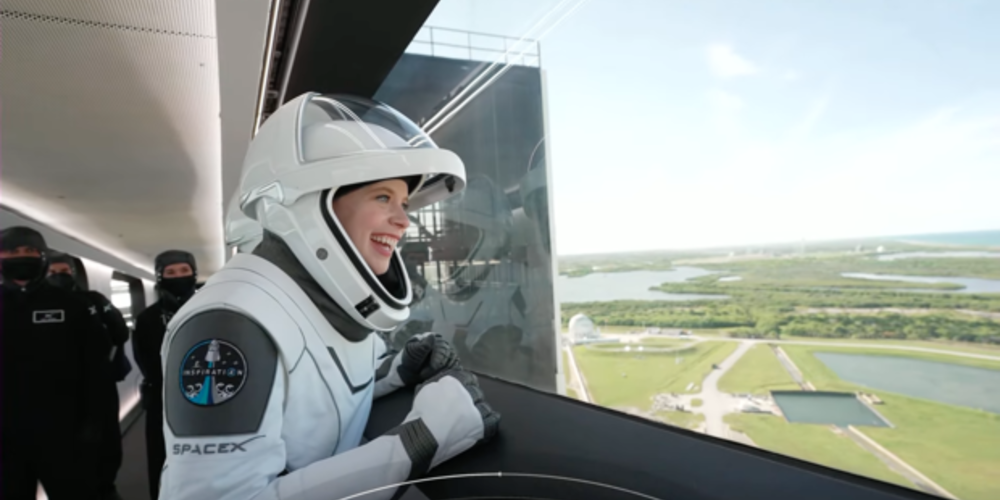