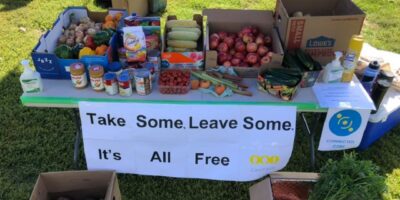 Leave what you can or take what you need from the CareTable this weekend.

CareTable is a pilot project created by Connected Core Barrie out of the Mayor’s Office. It came about less because of COVID-19, but because of what people did in response. “A lot of people picked up urban gardening,” said Andreea Campobasso, Principal Secretary at the Mayor’s Office. “However, once the crops started to yield, there was a ton of surplus, people were like ‘what am I going to do with this?’ so we created the CareTable.”

“If you have too many tomatoes but not enough cucumbers, or if you have tomatoes but you have never cooked with swiss chard, just grab something, and let’s just share the food,” she added. “However, we also intended this to be easy access for people that experience food insecurity for whatever reason, or have barriers to fresh produce.”

“It was a very dignified way to share because it is for everybody, it doesn’t single out people that cannot access. It’s a community table, take some, leave some, it’s for everybody,” she concluded.

The CareTable will be at the community garden within Golden Meadow Park on Saturday, September 26 from 1 p.m. to 3 p.m., then at Eastview Community Park on October 10, with a visit to Shear Park on October 24.