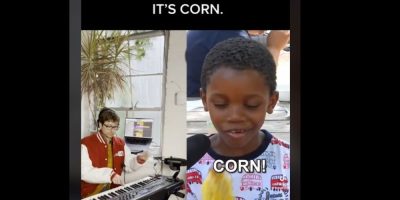 A young boy’s love of Corn on the Cob has brought the internet together.

A video of him describing what makes Corn great has gone viral on TikTok, and it’s easy to see why.

The way this sweet boy describes his favourite vegetable is the most heartwarming thing you’ll see all week and a reminder to enjoy the little pleasures in life.

In the short clip, the youngster is asked why he likes Corn.

“It’s a big lump of knobs; it has the juice. I can’t imagine a more beautiful thing. It’s Corn! I mean, look at this thing. When I tried it with butter, everything changed!”

The original clip was remixed and uploaded to TikTok over a week ago by schmoyoho. Since then, countless people have made their own version, bringing together people across all social media platforms.

And this user says it’s helped her depression

The videos have been viewed tens of thousands of times and will grow by thousands more by the time you read this.

So, grab some corn for dinner and sing along; that’s what I’m going to do.

feature image from schmoyoho via tiktok