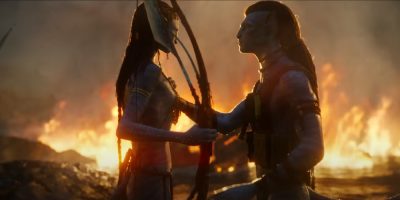 A good start for Avatar: “The Way of Water.”

The highly anticipated sequel was shown to the press at its world premiere in London, and already, people are losing their minds over it.

It’s been 13 years since director James Cameron introduced us to the world of Pandora, and if rumours are true, the special effects are breathtaking.

AVATAR: THE WAY OF WATER: Yeah never bet against James Cameron. Trying to spare hyperbole, but I’ve never seen anything like this from a technical, visual standpoint. It’s overwhelming. Maybe too overwhelming. Sometimes I’d miss plot points because I’m staring at a Pandora fish

Many also say the story is the movie’s true star and surpasses the first film.

The movie revisits Jack Sully and Neytiri, who face new challenges that endanger their home.

Famed filmmaker Guillermo del Toro has nothing but the highest praise for Cameron’s creation.

I say it again: Avatar 2 – seeing it you realize how long it has been since you saw a MOVIE-MOVIE (like that, in caps).

All the good press is great news for Cameron, who says it’s got to make a ton of money in order to make a profit.

“Avatar: The Way of Water” is in theatres on December 16.