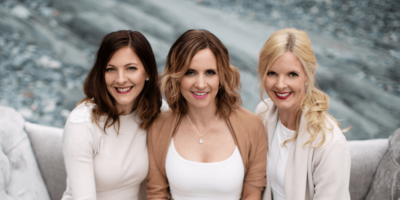 The Ennis Sisters are bringing their Christmas show to Barrie for the first time, Dec. 12. The  Juno Award winning trio has performed here in the past but not for several years. The Newfoundland siblings have garnered a loyal fan following in this province and say that Ontario is among the most loyal in Canada

“They’ll drive for hours to come and see our shows and some people even come to two or three of our shows if they’re in the same area, said Teresa Ennis. “It just fills the heart when you see people following you around to that extent. It keeps us motivated and inspired to do what we do because it can be quite difficult when you’re on the road.”

The Christmas tour has grown over the past 10 years from five dates in Newfoundland to a four week tour across Canada. This year’s show will feature their original music along with arrangements of traditional Christmas songs. There is a Celtic flavour to everything they do. They also incorporate Irish step dancing and recitations.

“Karen does some recitations which is a traditional way of telling stories and they’re really funny and very entertaining,” Teresa said. “It’s a family friendly show. It’s all about coming together as a community and celebrating Christmas and having a few songs together. There’s a lot of audience participation and it’s a really fun time for everybody.”

Maureen, Karen, and Teresa were born in St. John’s, Newfoundland and grew up in a musical family – their father played the button accordion, mother played guitar and piano. They were raised on Irish traditional Newfoundland music and would put on concerts every Friday night for their parents and family. Singing at weddings, pubs and festivals followed.

In 1997, The Ennis Sisters recorded their first album, Red Is the Rose, and which netted the MIA Folk Album of the Year Award. The next year marked their first Christmas album and a CBC television special.

More albums followed along with numerous awards and nominations, and tours of Canada, the US, Middle East, Norway, and the UK.

Each sister plays an instrument. For Maureen, it’s the acoustic guitar, Karen plays tin whistle and Teresa plays some mandolin and percussion. For the Christmas tour, they are adding Wade Tarling on piano and multi-instrumentalist, Acadian foot tapper Colin  Savoie-Levac on percussion.

They will also be featuring a couple of new Christmas songs such as ‘Kiss Me Beneath the Mistletoe’. It’s has a 1940s flavour.

All three are in committed relationships and Teresa has a six-year-old daughter Rose. The sisters lost their father last year. He was a big supporter, helped them with their start and served as their manager. Memories with him and other pivotal life moments inspired their latest album, Keeping Time.

As for their own Christmas, the sisters will be back in their hometown Dec. 21 where they will celebrate together with family, food, and music.  It’s part of their East coast culture.