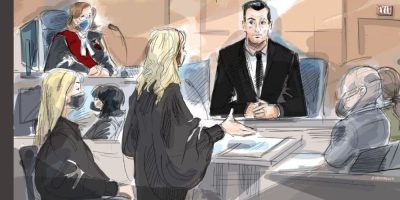 Jurors in the sexual assault trial of Canadian musician Jacob Hoggard are considering whether they have reached an impasse after telling the court they remain deadlocked on “some” counts.

The jury initially indicated it was deadlocked Thursday morning and was sent back to deliberate further, then returned just over a day later saying it still could not agree on some of the counts.

Ontario Superior Court Justice Gillian Roberts told them to think about whether any further instruction or evidence review would help or if they are at a “genuine impasse.”

Hoggard, 37, has pleaded not guilty to two counts of sexual assault causing bodily harm and one of sexual interference, a charge that refers to the sexual touching of someone under 16.

The Crown alleges Hoggard violently and repeatedly raped a teenage fan and a young Ottawa woman in separate incidents in the fall of 2016. It further alleges he groped the teen after a Hedley show in April 2016, when she was 15.

The defence argues the groping did not happen, and both sexual encounters were consensual. Defence lawyers contend the complainants made up rape allegations to cover up their embarrassment at having been rejected by Hoggard.

This report by The Canadian Press was first published June 3, 2022.