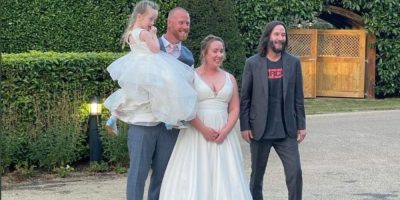 Keanu Reeves crashed a wedding in England on the weekend, and the couple couldn’t be happier.

The actor was staying at the same hotel where the couple James and Nikki Roadnight were having their wedding.

According to reports, the groom asked Reeves to join the celebration when he saw the actor having a drink at the bar. He said he might join them later.

An hour later, a hotel staffer approached the bride and told her that a “very special guest” wanted to speak to her.

In an interview with Newsweek, she explained:

“It was all very exciting. I went to say hi and introduce myself, and I offered him a drink, but he declined that and said he’d just had a long flight so he wouldn’t stay long. He was so kind and friendly and congratulated us on our wedding.”

Reeves hung out for a while, mingled, and was happy to take photos with guests before returning to his room.

It’s the third time (that we know of) Reeves has surprised a couple on their wedding day, with the first being in Los Angeles and New York, respectively in 2018.

Best #Wedding Picture EVER!
Moray & Maura recently got hitched in New York and were #photobombed by a rather scruffy chap passing by.
We think Moray looks way better than #KeanuReeves in his stylish @slanjkilts Modern Inglis #tartan #kilt and Midnight Blue Crail kilt outfit!! pic.twitter.com/tL5vqG2DL7