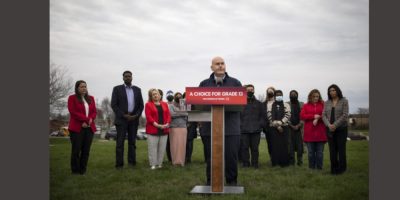 By Liam Casey in Kitchener

The Ontario Liberals would reintroduce an optional Grade 13 to allow students to catch up on learning lost during the COVID-19 pandemic, leader Steven Del Duca said on the campaign trail Friday.

The measure that would be brought in if the Liberals were elected next month would not be a “victory lap,” the party leader said, and would be available for a minimum of four years.

“This is going to be a structured option for our kids,” Del Duca said in a park near a high school in Kitchener, Ont.

Del Duca said his government would work with teachers, principals, school councils and boards to develop curricula for the extra year.

The program would cost $295 million, he said.

Grade 9 student Tessa Jagiellowicz, who was among several teens the Liberal leader glad-handed with before his announcement, said she’d benefit from an extra year of school.

“I feel like Grade 13 would be like closure for me to get a full normal four years,” she said.

Progressive Conservative Leader Doug Ford, who is seeking re-election in June, was asked twice about the idea to bring back an optional Grade 13 but didn’t directly answer.

“We’re pouring money into education,” Ford said in Bowmanville, Ont. “We’re building new schools … and repairing them to a tune of $14 billion and we’re delivering better education with more funding into education.”

Ontario was the lone province to have a fifth year of high school until it was eliminated under the leadership of Progressive Conservative premier Mike Harris.

Grade 13, which was officially called the Ontario Academic Credit – known colloquially as OAC –  began being phased out with Grade 9 students in 1999 and was eliminated in 2003. The so-called “double cohort” year saw two grades graduate at the same time.

The Liberals, who are looking to improve upon their third-party status in their election, are also promising to hire 1,000 more mental health professionals for students and staff.

“We saw this over the past four years, how so many of our kids were isolated, faced challenges, experienced behavioural shifts,” Del Duca said. “We need more mental health care at our schools.”

“It’s been crystal clear that a lot of our kids have fallen backwards” Del Duca said. “In fact, we don’t even have an adequate way to measure what the learning impact has been during COVID.”

The new assessment regime would be developed in consultation with experts, he said, to be deployed as quickly as possible.

Del Duca has released other planks of his education platform this week, including building 200 new schools and repairing another 4,500, hiring 10,000 more teachers and capping class sizes at 20 for all grades.