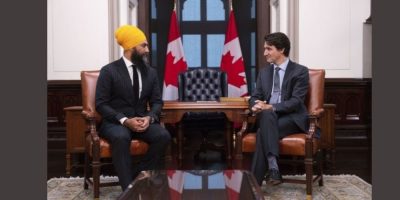 The Liberals and New Democrats have reached an agreement that would see the NDP support Justin Trudeau’s minority government through to 2025.

The Prime Minister’s Office published details of the deal Tuesday as Trudeau discussed the agreement ⁠— and his desire for a stable and productive Parliament ⁠— at a morning news conference.

The deal says the NDP will neither move nor vote for a motion of non-confidence that could topple the Liberals during the term of the arrangement.

The Liberals and NDP will meet regularly, and they agree to identify priority bills to move swiftly through the House of Commons.

They will prioritize work on a dental-care program for low-income Canadians, national pharmacare, affordable housing, phasing out subsides for fossil fuels, forbidding the use of replacement workers in federal industries during strikes or lockouts, and supporting Indigenous communities that wish to undertake burial searches at the former sites of residential schools.

They also agree to work on fair taxation measures, including changes for financial institutions that have made strong profits during the pandemic, and collaborate with Elections Canada on ways to make it easier to vote.

In announcing the deal, Trudeau cited the global and economic instability caused by Russia’s invasion of Ukraine as well as the result of last September’s federal election as catalysts of the new arrangement.

The Liberals failed to win a clear majority in the election and currently hold 159 of the 338 seats in the House of Commons, while the NDP has 25 MPs.

“The message from Canadians was as clear as the mandate they gave Parliament: work together to put people and families first, deliver results and build a better future,” Trudeau said.

“What this means is that during this uncertain time, the government can function with predictability and stability, present and implement budgets and get things done for Canadians.”

Trudeau said the deal would focus on issues on which the parties agree, rather than disagree. On areas where the Liberals and NDP do not agree, such as a potential increase in defence spending in response to Russia’s attack on Ukraine, the prime minister said such situations will be managed on a case-by-case basis.

“In the areas where there is not agreement, we will continue to do the things that the Liberal Party was elected to do,” he said. “And we’ll look for support from other parties as necessary as we move forward.”

At a news conference of his own, Singh also underscored the importance of co-operation to help Canadians, saying on-again, off-again negotiations had been underway since the 2019 election, which handed the Trudeau Liberals their first minority.

“Everyone I talked to, people are telling me that they need help now,” he said. “And they expect politicians to deliver that help. And that’s exactly what we’re doing. We’re using our power to get help to people.”

The NDP leader pointed to the published agreement when asked how he can trust the Liberals, adding he would start to measure the government’s commitment with the upcoming federal budget and that his party retains the right to retract its support at any time.

He also dismissed descriptions of the deal as a “coalition,” and said he was not offered ⁠— nor did he request ⁠— a position in cabinet.

Asked whether his party would support an increase in defence spending in the coming budget, Singh said it had better not come at the expense of his priorities.

“What we believe very strongly is that no decision around military spending should get in the way of our investments in health care, should not end up cutting our health care, or the initiatives that we fought for.”

Interim Conservative leader Candice Bergen, whose party is in the midst of a leadership race, blasted what she described as a “backroom deal that would see Justin Trudeau get the majority power that he tried desperately to get last fall in the last election, but he failed to get.”

Bergen proceeded to accuse the Liberals of having effectively given the reins of power to the NDP, which she alleged would lead to massive government spending and the death of Canada’s oil and gas industry.

“All of which, for Canadians, means more debt, more inflation, more jobs lost, more uncertainty, and frankly, more polarization,” she added. “This is not a good day for Canadians.”

While he also condemned the deal for giving the Liberals a “false majority,” Bloc Quebecois Leader Yves-Francois Blanchet said the agreement would not change his party’s approach in Parliament.

Blanchet said he spoke briefly to Trudeau on Tuesday morning before the prime minister announced the deal publicly, but that he was not asked to join the arrangement.

However, Blanchet did raise the spectre of increased support for Quebec independence if the Liberal-NDP arrangement consistently works against the interests of Quebecers.

If it works out, the deal announced Tuesday will spur progress on NDP policies, which the party can cite as a track record in the next election, said Karl Bélanger, president of Traxxion Stratégies and former interim national director of the NDP.

Because the deal isn’t a formal coalition, the NDP will be able to continue to operate as an opposition party with its own identity, he said.

“The key battle between the Liberals and the NDP will be about who will be able to take credit for these initiatives. It has not always worked out for the NDP in the past,” Bélanger said.

The deal will also buy the NDP time to build up its war chest for the next election, and show that the party is relevant in the meantime, he said.

Banner image: NDP Leader Jagmeet Singh meets with Prime Minister Justin Trudeau on Parliament Hill in Ottawa on Thursday, Nov. 14, 2019. The Liberals and New Democrats have reached a deal to keep the Liberal minority government in power through to 2025. THE CANADIAN PRESS/Sean Kilpatrick

This report by The Canadian Press was first published March 22, 2022.