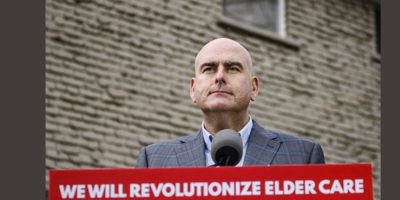 The pandemic was a wake-up call that institutionalizing seniors through long-term care has been “one of the great mistakes of the 20th century,” Del Duca said.

“Does anybody watching today actually believe that seniors want to be stacked up like cordwood in warehouses or institutions?” he said. “I don’t. The seniors I talk to don’t.”

Long-term care residents bore the brunt of the COVID-19 pandemic, especially in the earlier waves. The military was called in to help at a few facilities and issued a scathing report with details of residents suffering without proper nutrition or hydration.

The Liberals are pledging a home-care guarantee that would ensure 400,000 more seniors have access to home care in the next four years, and would boost total base funding for the system by $2 billion by 2026 through 10 per cent annual increases. They are also promising to build 15,000 more assisted living homes over the next decade.

The Liberals say they would stop renewing licences for for-profit long-term care homes next year, and would start negotiating and financing the transfer of existing homes to not-for-profit entities and municipalities.

Del Duca wouldn’t divulge a price tag, saying the party’s fully costed platform is coming soon. In some cases, he said a Liberal government would start conversations immediately with for-profit operators whose current licences expire soon, which may make for an “easier transition.”

Other cases may require the government to backstop loan guarantees or outright purchases, Del Duca said.

“I grasp that this is going to be complicated, but that it does need to get done and get done in a way that is real,” he said at his announcement at the home of two Toronto seniors.

The New Democrats – who have also promised to eliminate for-profit long-term care – said the Liberals “broke” long-term care during the party’s recent 15 years in power, and won’t actually fix it.

The NDP pledges, in their platform released Monday, to immediately stop renewing and issuing new for-profit licences for long-term care and to start transferring care to public and not-for-profit organizations. They would aim to build 50,000 new and modern beds.

The New Democrats also promise to invest at least $1 billion over four years in home care and establish provincial standards for home and community care.

The Liberals’ goal is to build 30,000 new community long-term care spaces by 2028 and redevelop and modernize 28,000 existing spaces.

Both Liberals and NDP pledge that new facilities will feel more like homes.

The Progressive Conservative government announced recently that it is on track to fulfill its 2018 election promise to build 30,000 net new long-term care beds by 2028, saying the province now has 31,705 new and 28,648 upgraded beds in development.

It also announced Monday that it plans to invest an additional $1 billion over three years to expand home care.

The Liberals’ seniors platform also includes promises to expand and make permanent the Seniors’ Home Safety Tax Credit and make the Ontario Caregiver Tax Credit refundable, tax-free and paid out throughout the year.