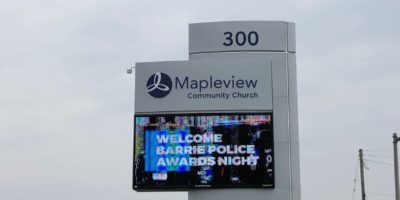 Cassy McLeod was on her way home one night, when her entire evening took a turn and she ended up saving a life.

Cassy was one of many recognized in Thursday evening’s annual Barrie Police Awards Ceremony, for her heroism and compassion during an incident in July of 2018. From the Barrie Police Service’s Jennett Mays:

“In July of 2018, Barrie Police Service received multiple 911 calls about a man standing on the outside of the railing, on a bridge over highway 400 in Barrie.

When officers arrived, they saw Cassy, who was speaking to the male, and appeared to be hugging him.

As they approached, it became clear that Cassy was assisting the male over the railing onto the roadway to safety. Cassy was holding on to him in a hug, and reassuring him.

That night, Cassy just happened to be driving by the scene and didn’t know who the person was. However, it was her interventions and calm actions, which prevented a tragic outcome.”

The planning & preparation is complete. We just need to await the arrival of our distinguished guests as tonight the #BarriePolice recognize their members for years of dedicated service & the community for providing assistance. #DedicatedToOurCommunity #dedication #PublicSafety pic.twitter.com/Um2y76Q9Hl

Also recognized at Thursday’s ceremony was Mike Emery, credited with saving his friend’s life after a heart attack. More from Jennett:

“Mike Emery was expecting to have a relaxing trip on the GO Train, as he travelled with a friend to visit the Auto Show in Toronto.

However, shortly after taking their seats, Mike noticed that his friend seemed to be in medical distress.

After pressing the train’s emergency alert button, Mike realized his friend was likely suffering a heart attack, and Mike would need to put into practice his emergency first aid training, which he received as a Special Constable with the Barrie Police Service.

As his friend stopped breathing, Mike began doing CPR, and was joined by GO Transit staff who brought the train’s defibrillator.

Following the prompts from the machine, Mike continued to work on, and monitor his friend, until the ambulance arrived and took over, transporting the friend to the hospital.

He survived and thankfully this incident had a positive outcome.”

A trio of local residents received a Lifesaving Award last night; Jared Bergsma, Matthew Cordy, and Alex Levesque were recognized for stepping in after a stabbing:

“On September 21, 2018, Jared, Matthew and Alex were walking downtown when they were approached by a man, who told them that he had just been stabbed. He was bleeding profusely in the left, kidney area.

Jared, Matthew and Alex worked together to call 9-1-1, apply a make-shift tourniquet from the man’s shirt and undertake other life-saving methods as instructed by the Barrie Police dispatch operator.

They were also able to obtain information about the man’s identity, and calm other by-standers who were on-scene, all while police and paramedics were on their way.”

Tonight, the #BarriePolice recognized the brave men & women of our service & the members of our great community for their outstanding service, work, acts of bravery, altruism & the profound contribution to public safety & security. Congrats to all! @mapleviewcc @cityofbarrie pic.twitter.com/7pYFMDYciP

Several officers were also recognized with Lifesaving Awards, including Constable Avneet Singh who saved a woman choking on food while at a Barrie residence taking a police report.

Constables Curtis Graber, Mason Hoare, and Petr Pospisil received their awards after keeping cool heads during a call in September of 2018. The trio responded to a medical distress call, and had to force their way into the home. Paramedics would later note the three officers remained calm and put first aid training to excellent use.

Over the evening, several officers were presented with Exemplary Service Bars and Medals, in recognition for thier years of service. They are as follows: