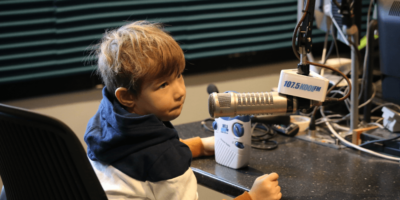 4-year-old Mason Rupke, who is from Oro, went viral over the weekend…but he has no idea what that means. Mason’s Dad, Jeremy, posted a video to his YouTube channel of Mason ‘mic’d up’ at hockey practice. The adorable video quickly grabbed attention online.

I mic’d up my 4 year old at Timbits Hockey so I could finally understand what the heck he was doing out there. It was…. Interesting @TimHortons @NHL pic.twitter.com/t3LiHWpbt9

The video racked up 5.4 million views on YouTube as of Tuesday, with several more million views coming from Twitter and other social media. It was shared online by the likes of TSN commentator Bob McKenzie, ESPN, and Houston Texans defensive end JJ Watt. Hockey players all across country were calling the clip “so pure” and “hilarious”.

Despite all the attention, Mason has no idea that he’s ‘gone viral’. His Dad says Mason has no real understanding of all the attention, but is enjoying the different media interviews (and the trips to “Ba-Donalds”). The family has been pleasantly surprised by the fact that the response to the video have been overwhelmingly positive.