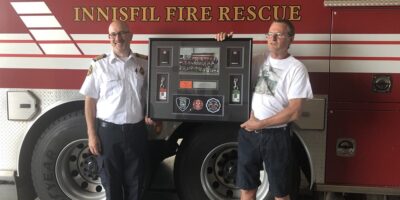 John Sullivan has had a lengthy run, now he feels it’s time to call it a day.

The Innisfil Fire and Rescue Service bid a fond farewell with a hearty thank you to Sullivan on Tuesday night, in recognition for his service as a volunteer firefighter in the community for 29 years.

Tonight, ⁦@Innisfil_FIRE⁩ says thank-you and goodbye to retiring Station 3 Volunteer Firefighter John Sullivan. John served the residents of #Innisfil for 29 years. Your dedication will not be forgotten John and good luck for the next chapter of your life! pic.twitter.com/9qjKF6jDhF

“I wanted to rethank the fire department for the honour it’s been,” Sullivan told Barrie 360 over the phone.

Sullivan served as a volunteer out of Innisfil’s Station 3.