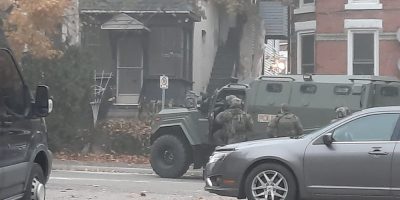 A man is facing a number of charges after OPP in Orillia responded to a report of a person who displayed what was believed to be a gun.

Around 4 a.m. on Tuesday, officers went to a residence on Coldwater Road near Albert Street, and once they got there and attempted to speak to the individual, he ran into a residence.

A perimeter was set up by police for public safety concerns. The OPP Emergency Response Team, the Tactics and Rescue Unit, Canine Unit and a Crisis Negotiator assisted with the investigation.

A 29-year-old Orillia man has been charged with the following:

·        Possession of a Weapon for a Dangerous Purpose – two counts

The accused was held for a bail hearing November 1, 2022, at the Ontario Court of Justice in Orillia.