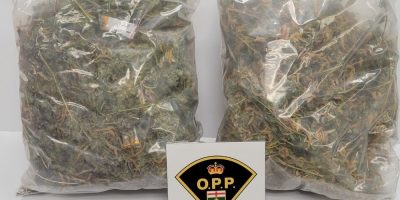 Police say a pickup truck approached the spot check at the intersection of Concession Road 4 and Crossland Road in Tiny Township around 9:30 p.m. on Dec. 10.

During a chat with the lone occupant, officers caught a whiff of marijuana.

Police say the investigation resulted in the seizure of two large bags containing over eight pounds of pot.

The motorist was charged with three drug-related offences including possession of marijuana and having cannabis readily available while driving and while in care of a vehicle.

The accused was released from police custody on a recognizance to appear before the Ontario Court of Justice on Jan. 27, 2022