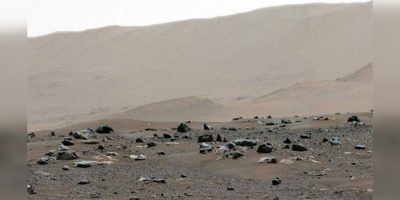 The first high resolution panorama showing the Perseverance Mars rover‘s landing site provides a remarkably detailed view of Jezero Crater, including the jagged rim of the crater in the distance and low cliffs marking the edge of an ancient river delta.

The panorama is made up of 142 images captured by the Mastcam-Z camera instrument over the weekend, three days after the rover’s dramatic landing.

The zoomable, dual-camera system is mounted on a remote sensing mast and is capable of rotating a full 360 degrees to provide panoramic colour and 3D images. It is capable of detecting something as small as a housefly across the length of a football field

Perseverance landed last Thursday in a crater that once held a body of water the size of Lake Tahoe. Billions of years ago, water entered the crater through a channel cutting through the crater’s rim, depositing sediments in a broad delta formation as it filled the crater to a depth of hundreds of feet.

The water vanished some three billion years ago, but the sediments might hold preserved remnants of ancient microbial life. Perseverance was designed to collect promising rock and soil samples that will be deposited on the surface for retrieval by another rover later this decade. The samples then will be launched into orbit for capture by a European spacecraft that will bring them back to Earth for detailed analysis.

The Mastcam-Z panorama looks out across the floor of the crater, showing Jezero’s craggy rim in the distance and eroded cliffs marking the edge of the delta formation. Nearby scouring marks where rocket exhaust plumes hit the surface as Perseverance was being lowered to touchdown by its “sky crane” jet pack.

“We’re nestled right in a sweet spot, where you can see different features similar in many ways to features found by (the earlier rovers) Spirit, Opportunity and Curiosity at their landing sites,” said principal investigator Jim Bell of Arizona State University. ASU operates Mastcam-Z in collaboration with Malin Space Science Systems in San Diego.

One goal of the initial imaging campaign is to identify relatively flat, boulder-free areas where a small helicopter, still attached to the belly of the rover, can be dropped off for tests to determine if flight in the thin Martian atmosphere is feasible.

Initial test flights are expected in about two months.