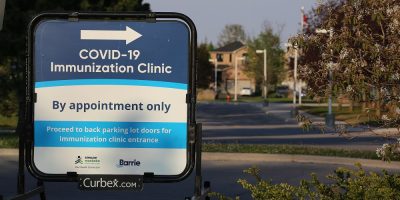 All but one of the region’s mass immunization clinics have ceased operation now that a majority of Simcoe-Muskoka is fully vaccinated.

The Simcoe Muskoka District Health Unit (SMDHU) will keep its clinic at 29 Sperling Drive in Barrie open through September, but the rest have closed. As of Friday, 81 per cent of the region’s population aged 12 and up had received their first shot, 74 per cent their second.

Dr. Charles Gardner, medical officer of health with the SMDHU, says there will still be plenty of options for those who haven’t gotten their shot yet. “We have a good infrastructure now with pharmacies, and primary care, and pop-up clinics that would probably be able to manage that,” he said, adding the same method would be used for third dose booster shots if required.

We want to recognize the approximately 550 individuals who collectively volunteered more than 27,500 volunteer hours to support the #COVID19vaccine clinic operations throughout #SimcoeMuskoka region between March and August 2021. THANK YOU!!! pic.twitter.com/eh7PEUFPwM

Gardner says the health unit will rely on pop-up clinics or doctor’s offices to provide vaccines once it comes time to immunize those under the age of 12.

While there are no plans to establish mass immunization clinics again, should the need ever arise, Dr. Gardner says at least they know-how. “I would say that the experience that we just had would be invaluable to draw upon; all of those relationships and the memoranda of understanding that we have with all the partners would be invaluable.”

Those requiring a COVID-19 vaccine can visit the SMDHU website for a list of pop-up locations or the province’s website to see which local pharmacies are offering the shot.