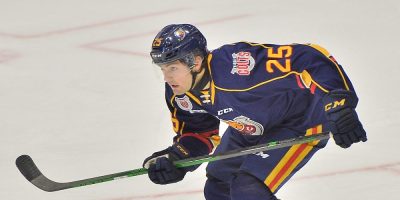 Marty Williamson knew exactly the type of player he was getting when he traded for Declan McDonnell from the Kitchener Rangers.

The OHL trade deadline deal that saw the Colts move prospect Hunter Brzustewicz to Kitchener in return drew little attention, but Williamson had seen the feisty Tampa Bay Lightning prospect and Lake View, New York native play against his son, Sam, all the way up in minor hockey.

“He’s doing exactly how I kind of remembered him,” the Colts general manager and head coach said of the 19-year-old winger, who has three goals and seven assists for 10 points in just six games since coming to Barrie. “He always impacts the games, whether it’s a hit, whether it’s a goal or a hard-working play.

“Every time he got his Buffalo team going and I thought, ‘My God, that kid is a good hockey player.’ It’s kind of funny that it comes full circle and we’re able to get him, and he’s doing the same things for us now.”

McDonnell, who now has 13 goals and 33 points in 33 games this season, has looked right at home with Barrie.

“I think it’s just a change of scenery, playing with different players,” he said. “I was excited to step into a new role on a new team and I’m having a lot of fun here. It’s a good group of guys. I think we got a good team here and can go pretty far here.”

A seventh-round pick (217 overall) by the Lightning in 2020, the five-foot-10, 171-pound winger has looked especially comfortable since Williamson put him on a line with centre Beau Jelsma and winger Ethan Cardwell recently.

The trio combined for three goals and six points in Barrie’s 3-2 overtime win over the North Bay Battalion on Saturday.

McDonnell has racked up two goals and nine points in the last four games since joining forces with Cardwell and Jelsma.

“I think me and (Cardwell) have good chemistry going now,” he said. “We’re both the same age and we’re playing good together. Also, Jelsma in the middle helps a lot.

“I think our whole line has good chemistry right now. We’re playing hard, we’re playing physical and we’re getting some big goals. It’s a lot of fun playing with those two.”

“They’re really enjoying playing with each other and there is good chemistry there,” he said. ” It’s not the perfect thing with two right-wingers, but they do seem to have some chemistry and (Cardwell) has adapted real well for us going to the left side.”

McDonnell’s impact on the game is far from limited to just the score sheet. Whether it’s delivering big hits or fighting through tough areas of the ice, the gritty winger doesn’t shy away from physical play.

“I like just competing hard out there,” McDonnell said. “Playing physical is just another aspect I like to add to my game away from the puck. I just try to compete hard and get a lot of energy going for the boys, and I just have fun doing it.”