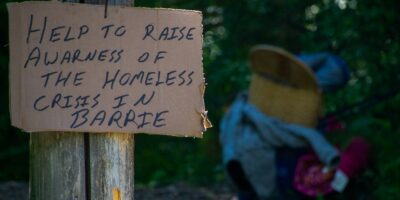 After serving eviction notices to those living in a wooded area near Milligan’s Pond earlier this week, the city began the process of clearing what remains on Thursday.

Folks living in the makeshift encampment were warned on Tuesday that eviction was imminent; Barrie City Hall worked with service providers including the David Busby Centre and Redwood Park Communities on best options for the residents of this encampment and tell Barrie 360 many residents had alternate housing lined up before officials showed up Thursday morning as a result.

There were only a few people left in the camp when the time for eviction came; police were joined by a three-person cleanup team wearing hazmat suits, while members of the David Busby Centre and the Gilbert Centre assisted residents in collecting their belongings.

One resident of the encampment, who didn’t wish to give his name, told Barrie 360 many of his neighbours had cleared out well before police arrival, as they were worried about having to deal with officers. However, the officers present made no aggressive moves and even called some residents by name. These folks were asked to collect their belongings and vacate with no rush.

The process continued into Thursday afternoon, with a cleanup of the site expected to progress over the coming days.