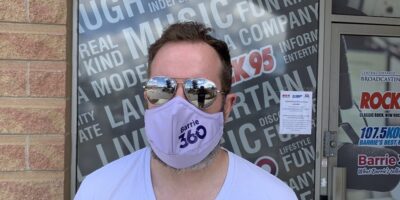 The use of masks became mandatory across Simcoe County and the District of Muskoka on Monday morning. By and large, many folks went along with it without difficulty. Some less so.

The use of masks in indoor public spaces became mandatory by order of the Simcoe Muskoka District Health Unit (SMDHU), which put it to businesses and organizations to come up with individual policies. The health unit has prepared instructions for businesses and organizations that they use their “best efforts” requiring the public to wear face coverings, including the use of signs and verbal reminders.

“We haven’t seen too much resistance yet,” said Stefano Agostino, owner of P_zza. “For the most part, we’re seeing positive feedback. People are following guidelines. Better safe than sorry.”

“The issue is, yes, someone could come in and claim they have a medical issue, and it could be valid,” said one worker at the downtown Barrie store Souldiers Skate Shop who wished to remain anonymous. “For me, personally, I will refuse service.

“At the end of the day, I could meet anyone out by the curb, I can bring items to the window, there are a handful of ways we could handle doing business with somebody who doesn’t want to wear a mask,” they added.

Some store employees with vendors within Georgian Mall indicated to Barrie 360 staff many were wearing masks, and those who lacked protective coverings were offered some. Barrie 360 was told only one customer refused, but instead of arguing the point, simply declined to enter the store.

In his virtual COVID-19 update on Monday afternoon, Medical Officer of Health Dr. Charles Gardner addressed the notion some could claim to have a medical issue preventing them from wearing a mask. “It’s possible. It’s also possible that people could simply refuse,” he said. “It’s not necessary that a business refuse them entry in order to still be compliant with what we’re directing.”

“We consider this to be enforcement in good faith,” continued Gardner. “We don’t want it to be excessively confrontational or onerous to those involved, so for that reason, we’re indicating that kind of proof is not necessary, the operators should take at face value when individuals meet that criteria.”