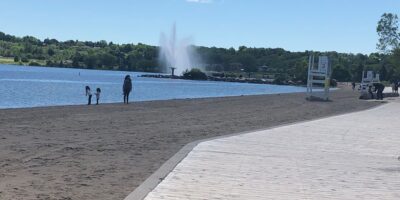 The City of Barrie’s by-law team had another busy weekend at the city’s waterfront.

The weekend that just passed represented the first days of a new ban on barbeques and tents as a means of further controlling crowds at city beaches, parks, and trails.

Barrie City Hall said it saw 140 tents or BBQs at its beaches over the weekend. By and large, folks went along with the ban when it was brought to their attention. “Most were in the main waterfront areas and most people complied with the new rules when asked,” Barrie’s Manager of Enforcement Services, Tammy Banting, told Barrie 360.

The city also handed out some 380 parking tickets as it continues to enforce tighter parking restrictions. City Council recently deemed many beach-area roadways as ‘residents-only’ and it appears to have helped. “The problems we were seeing before, that you couldn’t get through because there were so many cars parked, and illegal parking, that seems to have resolved itself now,” observed Mayor Jeff Lehman. “I think some people are still trying to park in the next lot further and just do the longer walk, but mostly what it seems to have done is push people to park in the lots, and that’s what we were hoping to do.”

Lehman added that social distancing at the city’s beaches remains a concern with so many people looking for ways to beat the heat this summer.