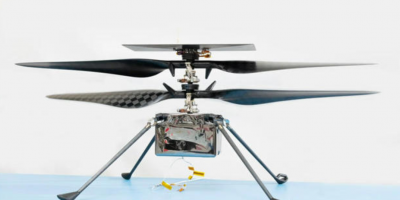 A small drone-like helicopter that hitched a ride to Mars aboard the Perseverance rover is being readied for its “Wright brothers’ moment” on the red planet as early as April 8, engineers said Tuesday. It would be the first powered takeoff and landing on another world.

Appropriately enough, the $80 million Ingenuity Mars helicopter is carrying a postage stamp-size piece of fabric from the Wright Flyer, the first aircraft the Wright brothers successfully flew at Kitty Hawk, North Carolina, in 1903.

The first of up to five test flights for the 4-pound drone could come as early as April 8, although engineers cautioned, they will not proceed until the craft is thoroughly checked out and data from the rover indicates favourable winds and weather.

But if the twin-rotor copter can successfully lift off the surface, autonomously fly in the ultra-thin atmosphere of Mars and safely land, all beyond real-time control by engineers on Earth, drones could become standard equipment for future missions to Mars and other planets.

“I can only imagine where we may be a decade or so from now,” said Bobby Braun, director of planetary exploration at NASA’s Jet Propulsion Laboratory where Ingenuity was built.

“If we can scout and scientifically survey Mars from the air with its thin atmosphere, we can certainly do the same in a number of other destinations across the solar system like (Saturn’s moon) Titan or Venus. We can … fly farther perhaps than a rover could traverse or access sites that are difficult to reach.”

Given the promise of Ingenuity, “the future of powered flight in space exploration is solid and strong,” he said.

The $2.4 billion Perseverance rover landed Feb. 18 in Jezero Crater on Mars to kick off an ambitious mission to look for past signs of microbial life and to collect rock and soil samples that eventually will be return to Earth for analysis.

It also carried Ingenuity, folded up and attached to the rover’s belly behind a protective shield. The helicopter is not equipped with any science instruments and its mission is not part of Perseverance’s search for signs of past life.

It is, rather, a technology demonstration project designed solely to test the feasibility of powered flight on Mars.

Despite the lower gravity of the red planet, which makes it easier to get off the ground, building a drone capable of flight in the cold Martian atmosphere — just 1% as thick as Earth’s — was a major challenge requiring miniaturized electronics and ultra-lightweight components.

The fuselage is about the size of a tissue box, measuring 5.4 inches by 7.7 inches by 6.4 inches. The drone’s rotor drive system, flight computer, two cameras, radios, batteries and heaters are all packed inside the fuselage.

To get the craft off the ground, Ingenuity is equipped with two 4-foot-long counter-rotating variable-pitch carbon fiber blades that can be spun up to about 2,400 rpm, fast enough to generate the necessary lift.

Solar cells mounted atop the rotors provide the power needed to recharge the helicopter’s lithium-ion batteries between flights.

Perseverance will drop Ingenuity at the center of an already identified 33-foot-square “airfield” near the rover’s landing site that is flat and free of any rocks that could pose a hazard. The rover then will drive off, positioning itself about 330 feet away where its cameras can safely monitor the upcoming flight tests.

For its first flight, Ingenuity will power up and rise to an altitude of about 10 feet. It will hover in place for about 30 seconds, turn and then descend to landing. Additional flights will reach about an altitude of 16 feet and range up to 150 feet from its takeoff point.

Because Earth and Mars currently are separated by about 156 million miles, it takes radio signals 28 minutes to make a round trip. That makes any sort of real-time flight control impossible.

But Ingenuity’s cameras will snap 30 images per second to let its flight computer determine exactly where it is at all times and make adjustments as required, 500 times per second, to counter wind gusts to stay on course.

“We have done a lot of testing,” said chief engineer Bob Balaram. “We did a number of flights that characterize the performance of the system to understand how well it can control itself … to make sure that we knew how this thing could fly on Mars,”

“Everything that we could possibly do here on Earth has been done, and now it’s time for us to take that same vehicle to Mars and subject it to the ultimate test.”

NASA managers plan to complete Ingenuity’s flight tests within about one month. After that, Perseverance will press ahead with its primary science mission.