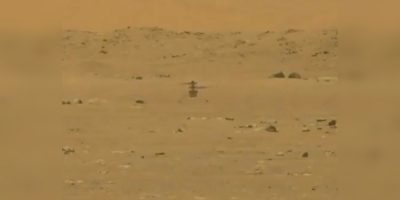 After overcoming an earlier software glitch, NASA’s $80 million Ingenuity helicopter spun up its carbon-composite rotors and lifted off the dusty surface of Mars early Monday to become the first aircraft to fly on another planet, a “Wright brothers’ moment” that could pave the way to future interplanetary aircraft.

Tipping the scales at just 4 pounds — 1.5 pounds in the lower gravity of Mars — Ingenuity’s counter-rotating 4-foot-long rotors, spinning at more than 2,500 rpm, were commanded to change their pitch, “biting” deeper into the thin atmosphere for liftoff from the floor of Jezero Crater around 3:30 a.m. EDT.

With the Perseverance rover looking on from a safe distance, Ingenuity was programmed to climb 10 feet straight up, hover, turn in place and then land for a test flight spanning just 40 seconds or so

And it did just that.

JPL engineer Håvard Grip reported Ingenuity “performed spin up, take off, climb, hover, descent, landing, touchdown and spin down. Altimeter data confirms that Ingenuity has performed the first flight of a powered aircraft on another planet!” The helicopter team burst into cheers and applause.

Initial images, including a short video, showed the small helicopter lifting off while a still image showed its shadow on the surface of Mars.

Data confirming the historic flight reached Earth three hours after the flight, after relay through NASA’s Mars Reconnaissance Orbiter. Once on its way, the data took nearly 16 minutes to cross the 178-million-mile gulf between Mars and Earth.

That’s when engineers at NASA’s Jet Propulsion Laboratory in Pasadena, California found out the helicopter took off as planned and carried out the first powered takeoff and landing on another world.

“We’re ready for another historic moment”

“On a cool December morning in Kitty Hawk, North Carolina, history was made (in 1903),” Thomas Zurbuchen, director of space science at NASA, said earlier. “It took 12 seconds to make history, the first controlled flight here on Earth, and something that had huge consequences.

“We’re ready for another historic moment, a historic moment the likes of which, I believe, have analogs in 1903 — controlled flight on a different planet,” Zurbuchen said.

Ingenuity’s short up-and-down maiden flight might sound trivial given the performance of inexpensive drones on Earth.

But flying in a mostly carbon dioxide atmosphere just 1% as thick as Earth’s on a planet so far away, direct human control isn’t possible and where the temperature drops to more than 100 degrees below zero every night poses a major technological challenge.

If successful, larger, more sophisticated drones likely will be sent to Mars and elsewhere in the solar system to carry cameras and science instruments to locales that are not accessible to rovers or, eventually, astronauts.

Ingenuity was carried to Mars bolted to the belly of the Perseverance rover, which landed in Jezero Crater on February 18. The rover later dropped the helicopter to the surface and backed away to observe the first of up to five short test flights.

Equipped with two cameras, the helicopter does not carry any science instruments. It was added to Perseverance’s mission solely to determine the feasibility of powered flight in the red planet’s thin atmosphere.

The initial test flight originally was planned for April 11. But two days earlier, a rotor spin-up test was aborted by the helicopter’s flight software when it failed to transition to flight mode as planned.

Engineers at JPL reviewed telemetry and came up with two solutions. One required uplinking a few additional commands to the control software, an approach expected to work about 85% of the time.

The other option was to replace the flight software with a modified version that’s been uplinked and stored aboard Perseverance. That would completely eliminate the problem, but it would require several more days to implement and introduce at least a slight element of additional risk.

After a detailed analysis, the helicopter team went with the first option.

“This solution is the least disruptive to a helicopter that, up until we identified the (command sequence timing) issue, has been behaving just as we expected,” Project Manager MiMi Aung said in a blog post. “It is the most straightforward, since we do not have to change its configuration.

“We also know that if the first attempt does not work on Monday, we can try these commands again, with good probability that subsequent tries in the days following would work even if the first doesn’t. For these reasons, we’ve chosen to pursue this path.”

banner image – NASA’s Mars helicopter Ingenuity is seen during its first flight on the planet in still image taken from a video on April 19, 2021 via NASA/JPL-CALTECH/ASU