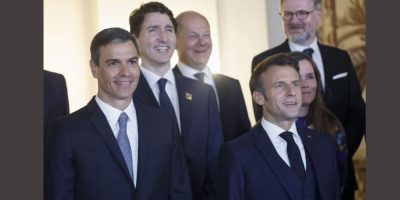 Russian troops poured into Ukraine on the morning of Feb. 24, invading by land and sea as airstrikes rained down on cities, in an all-out attack unlike anything seen in Europe since the Second World War.

The months that followed have left thousands dead, millions more displaced, led to famine and fuel shortages and fundamentally changed the world order.

Now the North Atlantic Treaty Organization is prepared to embark on the greatest overhaul of the alliance’s deterrence capabilities since the Cold War at a leaders’ summit in Spain, but Canada’s role in the new defence strategy remains uncertain.

NATO leaders, including Prime Minister Justin Trudeau, have gathered in Madrid for the landmark summit to discuss how they will respond to Russia’s ongoing invasion of Ukraine.

“We meet in the midst of the most serious security crisis we have faced since the Second World War,” NATO Secretary-General Jens Stoltenberg said as he arrived at the summit Wednesday. “It will be a transformative summit because we will make historic decisions.”

Ukraine President Volodymyr Zelenskyy is expected to address the leaders at the outset of meeting.

Meanwhile Russia has launched fresh attacks on civilians in the country — most recently with a missile strike on a shopping mall in Kremenchuk in central Ukraine Monday that killed at least 18 people.

Russian President Vladimir Putin offered Ukraine’s aspirations to join NATO as one of the justifications for the invasion.

At the G7 in the Bavarian Alps in Germany, Chancellor Olaf Sholz described the fine line leaders must walk.

“We are taking tough decisions,” Sholz said, speaking to media during a walk around the G7 summit site with Trudeau on Monday.

“We are also cautious that we will help Ukraine as much as is possible but that we also avoid that there will be a big conflict between Russia and NATO.”

NATO Secretary-General Jens Stoltenberg signalled more troops are now needed and a heightened state of readiness will be necessary to keep Russia at bay.

Canada’s foremost contribution to the front against Russia is in Latvia, a Baltic nation along Russia’s western border, where Canada has led a 2,000-strong battlegroup since 2017.

Similar units led by Germany, Britain and the United States lead are spread across the southern coast of the Baltic Sea.

Earlier this week, Stoltenberg said the number of troops in those battlegroups would double to between 3,000 and 5,000.

The alliance is also dramatically increasing the number of forces who would be ready to respond quickly in the event of a full-scale war from 40,000 to 300,000.

The question is whether Canada will contribute those troops and the funds needed to keep them poised for potential action.

“It sure seems like the alliance is looking to make some concrete announcements about increased actual capabilities, on higher readiness for the alliance, and I’m interested to see whether or not we have any more gas left in that particular tank,” said David Perry, defence and foreign policy analyst for the Canadian Global Affairs Institute.

Trudeau said that’s what he’ll be speaking about with other leaders.

“We, like others, are developing plans to be able to scale up rapidly,” Trudeau said at a press briefing at the conclusion of the G7 summit in Germany Tuesday.

In a one-on-one meeting with Trudeau before the NATO meeting Wednesday, Stoltenberg heaped praise on Canada for its contributions to the alliance.

“It’s great to see how really Canada is playing a key role in strengthening NATO’s deterrence and defence amidst the most serious security crisis we’ve faced since the Second World War in Europe,” he told Trudeau in a small meeting room in the lower level of the convention centre where the summit was held.

But Canada is already under-delivering on a promise to NATO to dedicate two per cent of its gross domestic product to military defence.

Members of the 30-member military alliance agreed to the target in 2014, and it’s expected to be front and centre when leaders convene Wednesday.

A report released by Stoltenberg estimates Canadian defence spending will instead decline as a share of GDP to 1.27 per cent this year, down from 1.32 per cent last year and 1.42 per cent in 2020.

The leaders should also discuss an exit plan for the war, said Robert Baines of the NATO Association of Canada.

“I think the NATO leaders have said, ‘Well, we’re with Ukraine for as long as Ukraine needs us.’ And then to try to actually square that circle and say, OK, so there’s no exit strategy. That’s always challenging,’” Baines said.

The summit will also welcome new potential partners in Europe and Asia. Delegations from Sweden and Finland, which have applied to join NATO, will be in attendance, and Japan Prime Minister Fumio Kishida and South Korean President Yoon Suk-yeol will be the first leaders of their respective countries to attend a NATO summit.