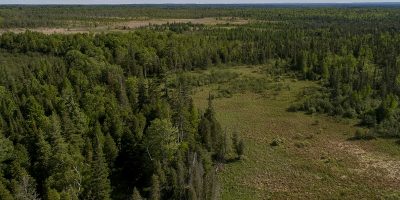 A 32 acre collection of forests, fields, wetlands and headwater streams surrounding the core of the Minesing Wetlands has received protection by the Nature Conservancy of Canada (NCC).

The newly created Baldwick Bluff Nature Reserve is another addition to the Minesing Wetlands, which acts as a protection buffer to the main wetlands, ensuring that wildlife have the room they need to thrive. Located just 15 minutes west of Barrie, the Minesing Wetlands helps control floods and provides clean water for nearby communities. The area is also a habitat for species at risk, including the eastern meadowlark (threatened), bobolink (threatened), and Hine’s emerald dragonfly (endangered), which is found nowhere else in Canada but the Minesing Wetlands.

“The Minesing Wetlands are an amazing place — where birds stop over in the tens of thousands during spring migration, fish are plentiful in the rivers, and deer and other wildlife find a protected haven to rest. It also provides recreational opportunities from paddling to hiking to snowshoeing. The Nature Conservancy of Canada is excited to announce the expansion of this key natural area,” according to Mike Henderson, Regional Vice-president, Ontario, Nature Conservancy of Canada.

The NCC said the Minesing Wetlands plays a key role in filtering the water that is carried by the Nottawasaga River into Georgian Bay, and that flows out of thousands of taps in nearby homes. This vast collection of marshes, fens and treed swamps acts as a large sponge to help mitigate floods and supports more than 30 species at risk. With rapidly changing climate, the organization notes that protecting large, intact wetlands is vitally important to the health and resiliency of local communities.

The Minesing Wetlands is comprised of 11,000 hectares of wetlands, fields and forests, and is often referred to as the “Everglades of the North” due to their designation as a Ramsar Wetland of International Importance—a distinction they share with their Floridian counterpart.

Over 70 per cent of southern Ontario’s wetlands have been converted into alternative uses since European settlement. The province’s remaining wetlands are threatened by non-native invasive plant species, pollution and habitat fragmentation.

Federal Environment Minister John Wilkinson said he was pleased that thanks in part to the Canada Nature Fund’s National Heritage Conservation Program, the Nature Conservancy of Canada will be protecting important wetlands and forests located in the newly conserved Baldwick Bluff Nature Reserve.

“Wetlands are among the most productive and valuable ecosystems in the world and play an important role in the fight against climate change. This new reserve surrounds the Minesing Wetlands, an internationally recognized site. Conservation of this important piece of land will also help provide habitat for species at risk and clean water for nearby communities. With help from partners like the Nature Conservancy of Canada and support from the local community, we are making progress toward our goal of conserving a quarter of Canada’s land and a quarter of its oceans by 2025,” added Wilkinson.

The recent local land purchase came to be because of financial donations from many area residents and organizations, especially the Friends of the Minesing Wetlands, the Nottawasaga Valley Conservation Authority and the Southern Ontario Orchid Society. The project was funded by the U.S. Fish and Wildlife Service, through the North American Wetlands Conservation Act, the Government of Canada’s Natural Heritage Conservation Program, part of Canada’s Nature Fund, and many private donors.