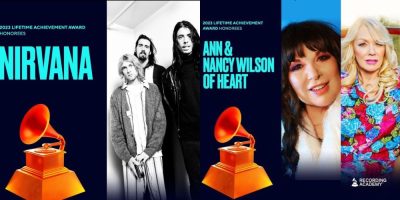 Nirvana and Heart’s Wilson sisters are among the musical artists to receive the Grammys lifetime achievement award next month.

The Special Merit Awards ceremony will honour artist’s contributions to the music industry.

In a write-up about Nirvana, the recording academy stated that “with more than 75 million records sold, Nirvana continues to be a singular inspiration for generations of fans and musicians the world over.”

Nirvana was inducted into the Rock and Roll of Fame in 2014.

The statement goes on to describe the impact that Hearts Anne and Nancy Wilson had on the industry.

“Heart’s influence can be palpably felt everywhere, from rock and heavy metal to hip-hop and pop. As a result, their music resonates in nearly every corner of pop culture.” it stated.

Other artists honoured this year include Slick Rick (aka “The Ruler”), The Supremes, Bobby McFerrin, Ma Rainey and Nile Rodgers.

Recording Academy CEO Harvey Mason Jr. said ,
“Each creator on this list has impacted our industry — from technical to creative achievements — representing the breadth of music’s diverse community. We’re excited to celebrate this group of legends next month that continues to inspire and shape the music world.”

The Grammy’s will air on February 4 in Los Angeles.