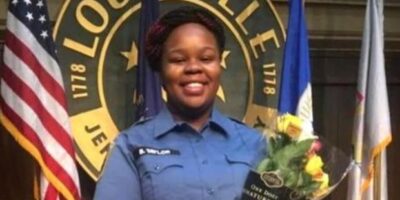 More than six months after emergency medical worker Breonna Taylor was shot dead by police in her Louisville home, a grand jury has indicted one officer in relation to shooting into her neighbour’s apartment — but no officers were charged for their role in Taylor’s death. Former officer Brett Hankison was indicted on three counts of wanton endangerment and two other officers who opened fire were not indicted.

Kentucky Attorney General Daniel Cameron announced the results of the grand jury proceedings in Frankfort following months of rallies, with protesters demanding that the officers involved in Taylor’s death be charged. Two of the officers who opened fire, Jon Mattingly and Myles Cosgrove, were justified in their actions, Cameron said. The officers were previously placed on leave, while Hankison has been fired.

The death of the 26-year-old Black woman is among several police shootings that have galvanized a nationwide push for police reform and racial justice. Louisville has been on edge for days awaiting a charging decision in the case, with rumors swirling but no clear indication of when it would come.

Hankison was booked into the Shelby County Detention Center this afternoon.  He posted bail and was released just after 5 p.m. local time.

Protesters took to the streets in Louisville after the decision was announced, chanting, “No justice, no peace.” Some were seen crying, CBS affiliate WLKY reports.

According to Cameron, a witness said officers both knocked and announced their presence before they raided Taylor’s home March 13 in a search linked to a drug investigation, meaning the warrant was not served as “no-knock.” He said when no one answered, officers breached the door. Mattingly, he said, was the only officer to enter the apartment. He said Kenneth Walker, Taylor’s boyfriend, fired a shot that hit Mattingly. Officers returned fire and six bullets hit Taylor, one of which was fatal, Cameron said.

Walker, a licensed gun owner, has said police did not announce themselves and that he fired in self-defense because he thought someone was breaking in.

Hankison fired 10 shots from outside, with some bullets hitting the neighbouring apartment, where there was a man, a child, and a pregnant woman. None of his bullets struck Taylor, Cameron said. The charges allege Hankison endangered Taylor’s neighbours, but Cameron said Mattingly and Cosgrove were justified in their use of force when they opened fire because Walker had fired his gun.

“According to Kentucky law, the use of force by [Mattingly] and [Cosgrove] was justified to protect themselves,” Cameron said. “This justification bars us from pursuing criminal charges in Miss Breonna Taylor’s death.”

Cameron said none of the three officers were involved in obtaining the search warrant, which was linked to a drug investigation into Taylor’s ex-boyfriend, who did not live there. No drugs were found in Taylor’s home. The warrant is under review as a part of a federal investigation, he said.

Kent Wicker, an attorney for Mattingly, said the grand jury’s decision not to indict Mattingly or Cosgrove shows “that the system worked and that grand jurors recognized and respected the facts of the case.”

“The death of Breonna Taylor is a tragedy,” Wicker wrote. “But these officers did not act in a reckless or unprofessional manner. They did their duty, performed their roles as law enforcement officers, and above all, did not break the law.”

Cameron called Taylor’s death a tragedy but said it was his job to put emotions aside and determine whether criminal statutes were violated.

“There is no doubt this is a gut-wrenching and emotional case, and the pain many people are feeling is understandable,” Cameron said. “I deeply care about the value and sanctity of human life. It deserves protection. And in this case, a human life was lost. We cannot forget that.”

What is wanton endangerment?

In Kentucky, wanton endangerment is when someone, under circumstances “manifesting extreme indifference to the value of human life, deliberately engages in conduct which creates a substantial danger of death or serious physical injury to another person.”  Hankison faces three counts of first-degree wanton endangerment, class D felonies that carry possible sentences of five years per count.

“I find your conduct a shock to the conscience,” Schroeder wrote. “I am alarmed and stunned you used deadly force in this fashion.”

Fischer said that while he understands many in the community feel the criminal charges “fall short,’ he said the case is far from over, citing the ongoing federal investigation that will probe whether the officers committed any civil rights violations. He also said an internal departmental investigation will determine whether the officers violated policies and should be disciplined.

Six current officers, including Mattingly and Cosgrove, are the focus of the internal investigation. Fischer wouldn’t say whether he would fire the two officers, as some in the community have called for, citing the investigative process.

Fischer last week announced a $12 million settlement with Taylor’s family over a civil lawsuit in the case, but her family has made it clear full justice would mean seeing the officers criminally charged.

Fischer has called for demonstrators to remain peaceful. Kentucky governor Andy Beshear authorized the deployment of 500 members of the Kentucky National Guard to Louisville.

Fischer announced a citywide curfew overnight from 9 p.m. to 6:30 a.m. in addition to other safety measures already in place, such as restricting traffic and parking in the downtown area. He said Louisville city buildings would be closed and he called on employers to allow workers to work remotely. Some downtown businesses had already closed in anticipation of the announcement, with many seen boarding up their windows.

“I urge everyone to commit once again to a peaceful, lawful response like we’ve seen here for the majority of the past several months,” Fischer said.