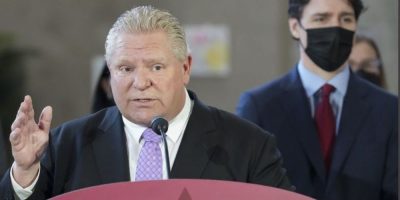 Ontario is making further changes to its $10-a-day child-care program funding in a bid to boost uptake, with nearly a quarter of operators still undecided about opting in less than two weeks before the deadline.

The Ministry of Education sent a memo to licensed child-care providers this week saying that it heard their feedback on a need for stability and consistency, and the new guidelines aim to make it easier for operators to participate in the program.

The funding changes essentially continue amendments recently announced for this year into 2023. When those changes were first introduced, opt-ins did increase, said a senior government source, who was not authorized to speak publicly about the matter. But the government wants to boost that further, the source said.

“Our No. 1 focus and goal is getting this program to be accessible to as many parents as possible,” the source said.

Most other provinces ultimately saw well over 90 per cent of eligible providers opt in. Ontario was the last province to sign a deal with the federal government and has extended its opt-in deadline from September to Nov. 1.

This week’s memo told child-care licensees that a “revenue replacement” model would continue for 2023.

It means that once parents see their fees cut in half at the end of this year, operators will receive that amount from the government to make them whole.

The ministry removed previous language about capping “undue” profits and a list of ineligible expenses such as property tax that had caused concern among some operators, particularly in the for-profit sector. Operators worried that they wouldn’t have enough money to make those payments if they opted into the program and their revenue from parent fees was cut.

But if the newest announcement was intended to ensure stability and predictability, some operators say they’re still going to need more.

“The federal government has guaranteed five years of funding, yet we are being asked to sign an open-ended contract and to reduce by more than half of our revenue, with no (guarantees) regarding funding beyond 2023,” Sharon Siriboe, the director of the Ontario Association of Independent Childcare Centres, said in a written statement.

“How can any small business remain viable and be asked to make such significant changes with only 14 months of clarity?”

Andrea Hannen, whose Association of Day Care Operators of Ontario represents both for-profit and non-profit providers, said she is hearing the same thing from operators that haven’t yet signed on in both sectors.

“Daycares don’t normally fly by the seat of their pants,” she said.

“Daycares are normally doing some advanced planning, they’re looking at a three-year (or) five-year timeframe in a lot of cases, for planning their operations … What happens in 2024? Because don’t forget, over the life of the agreement your reliance on government funding becomes greater, so there’s more and more control, in that case, that is taken out of your hands.”

The ministry said in its memo this week that it is consulting with the sector and working on a revised funding formula for 2024, and that it intends to release a discussion paper on what’s envisioned.

The funding changes first announced in August caused consternation among advocates for a non-profit system, who said they remove checks and balances on public money and amount to capitulating to for-profit operators, which represent a quarter of licensed spaces in Ontario.

Carolyn Ferns, the policy co-ordinator for the Ontario Coalition for Better Child Care, was one of those concerned advocates and said with this latest memo she is at least pleased to see there will be broader consultation going forward instead of closed-door meetings with a few groups of operators.

Karina Gould, the federal minister of families, children and social development, has said she is discussing those changes with Ontario.

“We’re working very collaboratively together in partnership to make sure that we can expand this to as many operators and parents as possible, while always making sure that we’re respecting the sound use of public funds,” she said at a press conference Thursday in Toronto.

“Ultimately, we want to be sure that public dollars are being used responsibly, and so we’re continuing to do that dialogue with the province.”

Operators participating in the program will have to submit audited financial statements for 2023, while it’s not required for 2022.

Some providers, though, are concerned about a different financial aspect. The ministry is including an additional $130 million in funding to account for rising costs. But it amounts to an extra 2.75 per cent in funding for providers in 2023, and in September, Ontario’s inflation rate was 6.7 per cent.

Kim Yeaman, who runs a child-care centre in Innisfil said base rates that parents pay right now are not covering her expenses due to inflation.

“That 2.7 per cent is not even close to covering any costs,” she said. “We’ve been working this entire year at a loss.”

Any child-care operator considering opting in has had to freeze their parent fees since March, when Ontario signed the deal with the federal government.

Non-profits are facing the same inflationary cost increases, and can’t operate at a loss, keeping any surpluses in reserve. For those centres too, Ferns said, an additional 2.75 per cent to account for inflation will be “tight.”