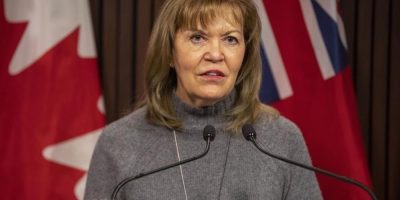 Ontario is seeing “glimmers of hope” in its fight against the Omicron variant, the health minister said Wednesday, setting the stage for what the premier has called a positive announcement on restrictions that’s expected Thursday.

COVID−19 cases are expected to peak this month, Christine Elliott said, with a peak in hospitalizations and ICU admissions to follow. New hospitalizations are doubling roughly every two weeks, instead of doubling every seven days, as was the case just a few weeks ago, she said.

“I do want to be clear, February will continue to pose challenges, especially for our hospitals as people continue to require care for COVID−19,” Elliott said.

“But our goal has always been to ensure capacity is there to provide care for those who need it. Given current trends, we are increasingly confident in our ability to do so.”

When the government announced a new round of public health restrictions earlier this month — including the closures of many types of businesses — it was done to avoid overwhelming hospitals, Elliott said.

“I want to assure Ontarians that we’re starting to see glimmers of hope,” she said. “The sacrifices you’re making now have meant we are beginning to see signs of stabilization.”

Dr. Kieran Moore, Ontario’s chief medical officer of health, said the rate of hospitalizations and cases in the intensive care unit are increasing at a slower pace. The average length of stay in hospital for COVID−19 patients is now five days with the Omicron variant, compared to nine days with Delta, he said.

The government announced on Jan. 3 that restaurants were ordered closed for indoor dining, museums, zoos and other such attractions were shut down, as were gyms, indoor recreation facilities, cinemas and indoor concert venues, while retail settings and personal care services were capped at 50 per cent capacity.

The restrictions were to last until at least Jan. 26, and Moore said last week he could not guarantee those businesses would reopen on that date.

Premier Doug Ford told Ottawa radio station CFRA this week that he would have a “positive” announcement in the coming days “about going back to other levels of restrictions.” A senior government source said that announcement will be made Thursday.

Moore wouldn’t say Wednesday if he was still signalling caution about reopening on Jan. 26, but said the government’s plan will be phased, gradual and based on data.

Schools were also moved online for two weeks earlier this month, with classes resuming in person this week. Schools themselves haven’t had a significant impact on COVID−19 transmission, Moore said.

Ontario reported 4,132 people in hospital Wednesday with COVID−19, and 589 people in intensive care — a decrease in hospitalizations from 4,183 the previous day, but an increase in ICU patients from 580.

Matt Anderson, the CEO of Ontario Health, which manages the province’s health system, noted that at the peak of the third wave there were nearly 900 COVID−19 patients in ICUs.

“However, it’s important to remember that even while these key measures are trending in the right direction, we don’t feel that in the hospitals,” he said.

“We don’t realize these benefits for a number of more weeks. We still have hospitals that are under very challenging circumstances as we deal with these rising numbers.”

There were 59 new deaths reported Wednesday −− the highest in about a year.

Moore said he is trying to determine what is behind large daily numbers of deaths reported this month, including the vaccination status of people who died and whether COVID−19 caused the death or was associated with it.

But he said he believes a “significant proportion” are related to the Delta variant.

“As we all remember, we had that Delta rise at the end of December, and then Omicron took over Delta, (which) is a much more severe pathogen, had a higher death rate associated with it,” Moore said.

“(When) someone gets admitted to hospital, then often they’ll get transferred to the intensive care unit, then they if they deteriorate, they get intubated to be able to maintain oxygenation levels. And then they either pull through or sadly, a significant proportion die and that process often takes four to six weeks.”