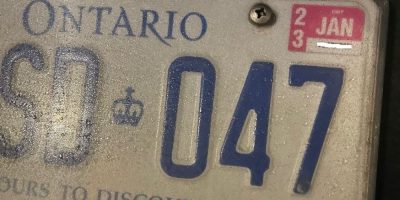 The legislature is back in session after its winter break, and Ford says the government will be introducing red tape legislation today that will also allow the province to refund any licence plate renewal fees that drivers have paid since March 2020.

To receive a refund cheque, vehicle owners who have moved recently will need to confirm that their address information on their vehicle permit or driver’s licence is up-to-date at Ontario.ca/AddressChange by March 7, 2022, and pay any outstanding fees, fines or tolls

Ford says the cost of living is going up and the past two years have been especially hard on Ontarians, so this is a concrete way to make life more affordable.

The measure will save drivers $120 a year – $60 a year for people in northern Ontario – but will cost the province $1.1 billion a year in lost revenue.

Ford says it’s one billion dollars that is going back into the economy, and will still benefit the province because it will create a broader tax base.

The premier, however, sounded less certain about another affordability promise, saying he will “look into” cutting gas prices.

He had said as recently as November that his Progressive Conservative government will meet its promise to cut gas prices by 5.7 cents, and will do it before the next budget, which is due by March 31.

This report by The Canadian Press was first published Feb. 22, 2022.