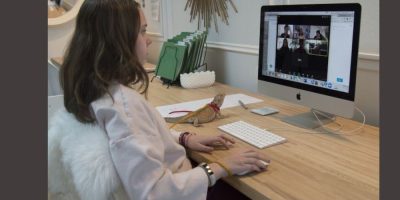 School boards across Ontario are nailing down virtual learning plans for the upcoming school year and some are finding that programming is challenging to offer, with significantly lower student interest.

The province requires boards to offer remote learning as an option for the new school year, as is has for previous pandemic school years. But enrolment has declined each year, and not all boards are able to offer a full virtual school option.

At the Hastings and Prince Edward School Board in eastern Ontario, of its approximately 15,000 students, 113 elementary students plan to do remote learning. But there just wasn’t enough interest from students in Grades 9 through 12 to offer a full virtual school for them, officials said.

“We have seen a significant decline in the numbers of families and students that are interested in virtual school,” said Tina Elliott, the board’s superintendent of education.

“Our nine to 12 response though, was significantly lower than what we’ve experienced … we were not able to offer virtual school in the way we’ve delivered it.”

Interest in remote elementary learning is also well down, Elliott said, but the board can make it work by doing combined grades.

High school students are being told they can register for eLearning courses, which are more independent online courses rather than direct virtual instruction, as well as courses through TVO, or register for one or two classes in person and the rest online.

The board has tried, over the pandemic years, to maintain connections between virtual students and their home schools, Elliott said, as students eventually return to in-person learning.

“It certainly would always be our preference in supporting academics to be in person,” she said.

The Upper Grand District School Board in southwestern Ontario, offered full virtual school for both elementary and secondary students for the past two years, but doesn’t have the numbers to do so this year for secondary either.

There are 166 elementary students enrolled in virtual school for the upcoming year, a spokeswoman said, compared to 1,000 this year and 4,500 the previous year.

It’s a similar story in the Bluewater District School Board, covering Bruce and Grey counties, where 91 elementary and 67 secondary students have chosen remote learning for the next year, representing less than one per cent of all students, a spokesman said.

Meanwhile, in the Rainy River District School Board in northwestern Ontario, there were too few interested students to offer an elementary virtual school. Out of the board’s 2,600 students, just 10 expressed interest in remote learning, said director of education Heather Campbell.

She couldn’t offer a breakdown of how many of the 10 students were in elementary or secondary school. While secondary students can be accommodated through eLearning, the board had to tell families that virtual school for elementary wasn’t viable, Campbell said.

“My daughter’s grades have improved so much,” she said of her eldest child in an interview. “She’s been so much happier during school. Before this, I would have to fight with her to get her into class. I was dealing with crying every day, (her) not wanting to go.”

Evans’ daughter likes that she can sit by herself and read a book during a recess and grab a snack from the fridge, can concentrate better without the noise of the classroom, and is not subject to bullying.

“I really hope that it continues as a permanent option,” she said. “If it doesn’t, then I’m going to have to look at homeschooling … After seeing how well they do in this, I would never be able to send them back to in-person school.”

“Face-to-face in a classroom, learning, is the best way to learn,” she said. “However, we do recognize for a variety of reasons some kids need to learn at home. So… if we have to offer online learning and learning from home, we need to do it in the very, very best way we possibly can.”

The government is providing boards with a $304 million COVID-19 Learning Recovery Fund and they are required to offer remote learning as part of that fund.

The funding can be used for hiring staff for virtual school, but a government memo to boards said the money is also for other time-limited staffing supports to address learning recovery, implementing the first year of a fully de-streamed Grade 9, supports for special education, and enhanced cleaning standards.

A Ministry of Education spokesperson said the government is focused on getting kids back to school in person.

“We respect parents and students and their ability to make the best decisions for themselves,” Grace Lee wrote in a statement.

In the Upper Canada District School Board in eastern Ontario, superintendent Susan Rutters said while the numbers are lower this year, they were able to assess their needs much earlier compared to previous years. That allowed them to create four fully virtual classes, where in previous years they did hybrid learning, with part of a class attending in person and part online.

Michelle Outmezguine, a Grade 5 teacher in York Region, had about 20 students in person and a few remote this year and she’s glad her board isn’t doing hybrid again next year.

“It’s very isolating for the child (in virtual) … and I feel like an air traffic controller,” she said.

“You really feel like your attention is being split and it’s emotionally and it’s mentally exhausting, because you’re concentrating on so many different things at once.”

Banner image: A grade 6 student takes part in a virtual school session with her teacher and classmates via Zoom from her home in Vancouver, Thursday, April 2, 2020. School boards across Ontario are nailing down virtual learning plans for the upcoming school year, and some are finding that programming is challenging to offer, with significantly lower student interest. THE CANADIAN PRESS/Jonathan Hayward