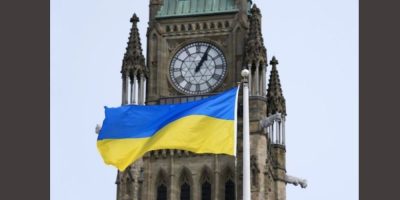 Ontario is offering emergency supports to Ukrainians fleeing the Russian invasion, including access to health coverage, housing, counselling and a job search hotline to help them once they arrive in the province.

Premier Doug Ford said he has heard that Ontario can expect about 40,000 Ukrainians to arrive under a new emergency travel authorization, noting that many people with family in the province have already arrived and are staying with relatives.

“Now more than ever, we stand shoulder to shoulder with all Ukrainians in the fight, and will always support our friends in their time of greatest need,” Ford said in Toronto on Wednesday.

Ford said the province wants to welcome skilled workers fleeing Ukraine – especially as the province faces a labour shortage – as well as their families.

“We will have all the critical supports that these families will need once they arrive here in Ontario,” he said.

The province said it will fund counselling and other culturally responsive supports through a $449,000 investment in Canadian-Ukrainian community organizations. It is also announcing a $1.9-million scholarship fund for post-secondary students arriving on an emergency basis.

Ontario is also providing an increase of $900,000 over three years to the Canadian Ukrainian Immigrant Aid Society for settlement services.

Ford said the Housing Ministry was working on plans to offer shelter to newcomers who need support, and said the province will make hotels available if necessary for new arrivals. He thanked the Ukrainian community in Ontario for stepping up to support newcomers, and said support efforts would have to come from all levels of government and communities.

“Depending on the amount of people that are coming, there may be a few bumps in the road, but I can assure you, they’re going to have safe haven better than where they were coming from,” he said.

This report by The Canadian Press was first published April 6, 2022.