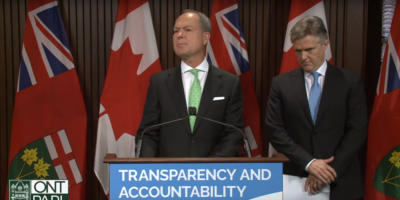 Ontario’s deficit last year was half of what Premier Ford claimed.

We heard from Queen’s Park yesterday the final deficit figure for the last fiscal year was $7.4 billion. Before his demotion, once-Finance Minister Vic Fedeli claimed the deficit would be near $15 billion by the end of the 2018-19 fiscal year.

Tory Treasury Board President Peter Bethlenfalvy denied claims the deficit was inflated for political reasons and to justify cuts. “We inherited what independent third parties said we inherited. Don’t ask us, ask them. They said $15 billion. So what we’re doing is, we’ve been working hard to provide conditions for a growing economy.”

“Our government inherited a significant fiscal challenge. Today’s results demonstrate that our plan to put Ontario’s finances back on track and foster a strong economic climate is working,” said Rod Phillips, Minister of Finance. “Thanks to higher than anticipated revenue and lower expenses, we have successfully reduced the deficit for the 2018-19 fiscal year.”

A statement from the opposition NDP party blasted the Ford Government for “bragging” about the cuts to public services. “After the Kathleen Wynne government was finished letting people down, Doug Ford barged in to make devastating cuts to services that everyday families really count on,” said NDP Deputy Leader Sara Singh. “It’s appalling that ministers were bragging about that today, even while students are crammed into crowded classrooms and children with autism have been going without the supports they need.”

The NDP claim changes between budget 2018 and the actual spending revealed Friday are: