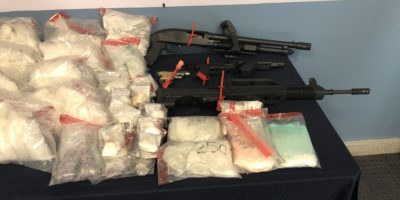 Twenty-nine people are a facing a total of 279 charges as a result of Project Shoreham, a collaborative police investigation that began with a street level drug probe in Barrie in July and blossomed into something much bigger.

During the investigation, police determined a group that had connections to the Greater Toronto Area had chosen Barrie and Angus as distribution locations for the street level of trafficking of cocaine, fentanyl and other drugs to be sold throughout Simcoe County and Muskoka.

The first search warrant was executed at a storage locker in Innisfil in September and netted police a number of firearms and drugs. Later that week, four additional search warrants were executed and more drugs were seized including cocaine, marijuana, crystal meth and heroin that contained fentanyl. Police also recovered six high end vehicles and about $20,000 in stolen property that was still in boxes from a recent break and enter.

The investigation spread to Muskoka and other search warrants were carried out with more drugs and firearms being seized.

“To those wishing to establish what you may believe to be complex drug distribution networks, our communities are not open for this type of business; through our ongoing commitment to our communities, the police will collectively use all the available resources, tools and investigative techniques that may be necessary to effectively eliminate your activity and rid our streets of criminal activity” said Kimberley Greenwood, Barrie Police Chief.

Seven of the suspects arrested by Barrie police were either from Barrie or the GTA, while 22 others were rounded up in OPP jurisdictions. Hometowns were not disclosed. A street value of the drugs seized was not released.

*6,500 street level doses of fentanyl (Fentanyl is lethal in quantities as small as two milligrams)