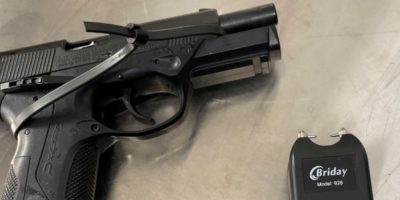 Two e-bike operators are up on weapons and drug charges following a traffic stop in Orillia.

On May 28, around 7:30 p.m., officers say they saw two e-bikes driving in an unsafe manner, and the riders were not properly wearing their safety equipment.

Upon stopping them, police say one individual was identified to be a suspended driver, and had an outstanding warrant. Officers say they found a black pellet gun, a conducted energy weapon, as well as suspected fentanyl.

OPP say the second operator was also identified as a suspended driver, and they located suspected cocaine in the individual’s possession.

Both were released on an undertaking and will appear in Orillia court at the end of July.

Orillia OPP would like to remind all e-bike operators that they are responsible for following the rules of the road and educating themselves on the Ministry of Transportation regulations related to their vehicles.