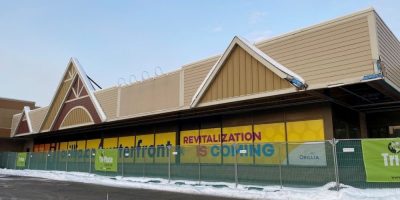 News release – from City of Orillia

Progress continues on the City of Orillia’s Waterfront Redevelopment Project at 70 Front St. N. as the southern portion of the existing plaza is prepared for demolition in January 2022.

“This site was identified as a significant opportunity for redevelopment in the 2012 Downtown Tomorrow Plan,” said Mayor Steve Clarke. “Since that time the City has been preparing the lands for sale and redevelopment to facilitate a transformation of these strategic lands, linking our beautiful waterfront and our heritage downtown.”

The community will likely have noticed fencing around the southern portion of the plaza which is allowing the demolition contractors to carry out abatement work and utility disconnections ahead of the demolition. The demolition does not affect the Metro store which will remain in place. All demolition activities will occur in accordance with the Ontario Building Code as specified in the demolition permit and the City of Orillia’s Noise By-Law.

“The demolition of the southern plaza is the culmination of years of land assembly, de-risking of the site through plans and studies and a comprehensive sales process that resulted in the City choosing FRAM Building Group (FRAM) as the preferred development proponent in July 2021,” said Councillor Tim Lauer, Chair of the Waterfront Working Group. “The demolition of the plaza is the first step in bringing Council’s vision to reality as it opens up the Coldwater Street viewscape in preparation for the Coldwater Street extension.”

Since the sale was announced this past summer, the City has been working closely with FRAM to facilitate due diligence activities in anticipation of a spring closing date for the sale. Discussions regarding preliminary servicing plans are taking place to ensure that the reconstruction of Centennial Drive takes into account the servicing needs of the new development in order to ensure a seamless redevelopment of both the public infrastructure in the waterfront area and the private redevelopment of the adjacent lands in the area of 70 Front St. N.

“Orillia’s downtown core is going through an impressive and exciting period of revitalization,” said Laura Thompson, Senior Manager of Business Development. “We have several new developments and a diverse and eclectic selection of new shops and restaurants that have recently opened in our community and we’re excited to host even more businesses through the Waterfront Redevelopment Project.”

Moving forward the community can expect to see work on the Centennial Drive reconstruction project start in 2022 with construction of the Coldwater Street extension slated for 2023.