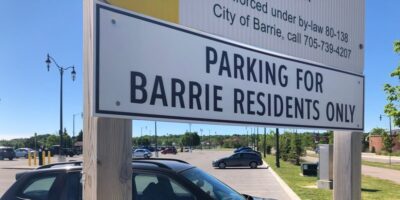 The City of Barrie’s new parking ticket fine kicked in first thing Saturday morning. Despite this and the heavy rainfall across the city, hundreds of parking tickets were handed out.

Barrie City Hall announced on Friday its new fine structure was approved by the province, raising the cost of a parking ticket from $30 to $100. Early payment would cost $75 instead of the $20 it had been at prior to the increase.

Over the first weekend in which the fine structure was in place, Barrie by-law officers wrote up 303 parking tickets at waterfront lots.

The city recently moved to make several waterfront lots and beach-area roadways residents-only as a means of curbing overcrowding at its beaches. Residents can display a waterfront parking pass, while those visiting the city are required to pay $10 an hour or $50 a day to park at waterfront lots.