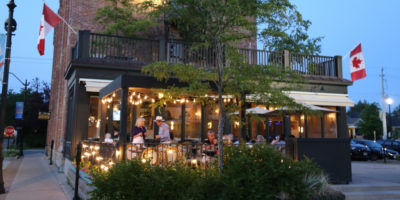 What a difference a few years can make, and a sprucing up.

Barrie Mayor Jeff Lehman says there is an energy downtown with the patios, even without the full range of events and activities that normally would be done there.

Extended hours at bar and restaurant patios on city-owned properties were approved at Barrie city council on Monday night, of which most of them are downtown.

They can remain open until 2:15 a.m. Thursday, Friday and Saturday nights, as well as Sunday nights on holiday weekends, and 12:15 a.m. the rest of the week.

Downtown owners had requested the extension as they continue to wrestle with the impact of COVID-19.

Lehman says patios were not a thing in downtown Barrie six years ago.

“They were seen as a problem,” said Lehman. “Too noisy and too much chance of rowdy behaviour, and so on.”

“But what they have done in the last six years is become really a fixture in our downtown, particularly on Dunlop Street, where most of them are.”

The mayor says the patios lighten up the street whether the street is closed or open. He also believes the wider sidewalks make a difference, too.

For bars and restaurants with patios that are not on municipal property, Lehman says those are governed by the Alcohol and Gaming Commission of Ontario.

“They have a licence to operate their patio, and typically it’s until 2 a.m.,” the mayor explains. “It was actually the ones downtown that were constrained to closing earlier. This will probably bring just about all of them into alignment with the same hours on weekends.”

The mayor pointed out the city’s noise bylaws still apply.

The motion passed by city council on Monday night also states that all other regulations and bylaws, including no amplified sound on the patios after 11 p.m., would continue to apply with the operation of the patios. Non-compliance of municipal regulations and bylaws could result in permits being revoked or further conditions being added to the permits.