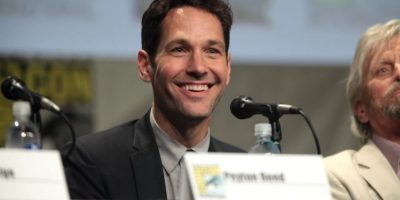 Paul Rudd is People‘s Sexiest Man Alive for 2021. The 52-year-old actor was bestowed the title on Tuesday’s episode of “The Late Show with Stephen Colbert.”

Before Colbert announced the big news, he teased other famous names who might be in the running, including Ryan Gosling — and even himself. He also reported on the speculation surrounding the title during his monologue.

“There has been rampant speculation in the sexiness markets. On Thursday, the New York Post reported that the title would go to Chris Evans.

Simultaneously, Dwayne ‘The Rock’ Johnson claimed it was his, saying he is always going to be the sexiest man alive, Colbert said.

During Tuesday’s episode, Colbert welcomed Rudd out under the guise of just promoting his new film, “Ghostbusters: Afterlife,” and the handsome star participated in a sketch about having his sexiness levels tested scientifically.

In order to figure out who @people‘s #SexiestManAlive is, @StephenAtHome put candidate Paul Rudd through a comprehensive sexy evaluation. Here’s exclusive footage of the exam. pic.twitter.com/m2TKt4M275

The sexy test is not complete until @StephenAtHome does a physical evaluation. Paul Rudd’s final exams are underway for @people‘s #SexiestManAlive! pic.twitter.com/JqqOdTKiIK

After pouring water all over himself, acting like a puppy at a dog show and undergoing an awkward medical examination, Colbert broke the news that Rudd was, in fact, not sexy. When he humbly accepted the diagnosis, Colbert pulled a Willy Wonka-like twist and revealed that humility was the sexiest attribute of all — thus announcing his title as People‘s Sexiest Man Alive.

He also revealed the People Magazine cover featuring Rudd, which the publication also posted to Instagram.

Rudd is taking over the title from actor Michael B. Jordan, who was named 2020’s Sexiest Man Alive.