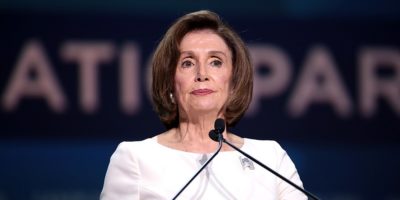 “Sadly, but with confidence and humility, with allegiance to our founders, and a heart full of love for America, today I am asking our chairman to proceed with articles of impeachment,” Pelosi said.

Pelosi’s announcement is a formal indication that the House will move forward with impeaching Mr. Trump after weeks of hearings. Democrats have previously insisted that they had not decided whether to draft articles of impeachment against Mr. Trump, although many Republicans believed impeachment to be a foregone conclusion.

As Democrats control the House, Mr. Trump is likely to be impeached. The vote is expected to occur on party lines, as Republicans consider the impeachment inquiry an overreach by Democrats bent on undermining the president. The Republican-led Senate is unlikely to vote to remove Mr. Trump from office, however.

Speaking on the Speaker’s Balcony in the Capitol, Pelosi said that Mr. Trump had “abused his power for his own personal political benefit” when he asked the Ukrainian president to investigate a political rival and a debunked conspiracy theory about the 2016 election.

“The president’s actions have seriously violated the Constitution, especially when he says and acts upon the belief, Article II says I can do whatever I want. No, his wrongdoing strikes at the very heart of our Constitution, a separation of powers, three co-equal branches, each a check and balance on the other,” Pelosi said.

“Our democracy is what is at stake. The president leaves us no choice but to act, because he is trying to corrupt, once again, the election for his own benefit. The president has engaged in abuse of power, undermining our national security and jeopardizing the integrity of our elections,” she continued.

Pelosi’s statement follows testimony from four constitutional scholars on Wednesday. The House Judiciary Committee heard testimony on the constitutional grounds for impeachment over the course of eight hours from four experts, three of whom testified to their belief that the president committed impeachable offenses in his dealings with Ukraine. The fourth scholar, called by Republicans, said that he believed Democrats did not have enough evidence to impeach the president, and were moving too quickly.