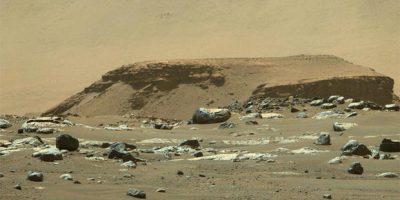 The Perseverance Mars rover is sailing through its initial checkout and activation, beaming back some 7,000 photos to date, unlimbering its seven-foot-long robot arm and taking a short test drive after a major post-landing software upgrade, engineers said Friday.

Robert Hogg, the deputy mission manager at NASA’s Jet Propulsion Laboratory in Pasadena, California, said the $2.4 billion rover’s science instruments have all been checked out, along with a suite of weather sensors to keep tabs on the harsh environment faced by the robot.

“Everything is going very well on our latest mission to Mars,” he said. “Perseverance has been doing an exceptional job during her first two weeks on the red planet. … I’m happy to report that yesterday afternoon, we carried out our very first drive on Mars.”

The one-ton rover carried out a short 13-foot drive, made a 150-degree left turn and then backed up about eight feet.

“You can see the wheel tracks that we left on Mars,” she told reporters. “I don’t think I’ve ever been happier to see wheel tracks, and I’ve seen a lot of them. This is just a huge milestone.”

Like the Curiosity rover that landed in another Mars crater in 2012, Perseverance moves at a top speed of just 0.1 mph. But thanks to improvements in its enhanced navigation software and its suite of cameras, “we can really drive five times faster than Curiosity, and we’re capable of averaging about 200 meters per (day),” Zarifian said.

Perseverance was lowered to the floor of Jezero Crater on February 18 at a site now known as Octavia E. Butler Landing, named in honor of the late African American science fiction writer and Pasadena native.

The rover’s landing was orchestrated by software designed to handle the challenges of the long, seven-month cruise to Mars and then the white-knuckle seven-minute descent to the surface. Once down, engineers faced the somewhat daunting task of flushing out the no-longer-needed software and loading the programming that will be used for the surface science mission.

“This is the software that really releases all the capabilities that Perseverance has available for our surface mission,” Hogg said. “It’s about 16 megabytes, so pretty small. But when operating, it has 140 tasks, all running on the rover’s computer at the same time.

“When we did this update, we had to be very careful not to have any major problems because, you know, there’s no help line to call or any way that we can run over to the rover and press the big reset button. So we were very careful, and getting it done was a big relief for the team.”

Scientists are studying initial imagery to determine the best path from the landing site to relatively nearby cliffs marking the eroded edge of an ancient delta where a now-vanished river once flowed into Jezero, possibly depositing traces of past microbial life.

Telephoto views from the rover show layered, weather-resistant deposits similar in appearance to shales on Earth that frequently preserve organic carbon and other “biosignatures.”

Two potential routes to the delta have been identified, but the science team has not yet selected the optimal course or identified a suitable area for test flights of an experimental $80 million drone still attached to the rover’s belly.

“Two weeks into the mission we’ve received about 7,000 images from the rover’s cameras, including our first views of some of the geologic targets of exploration that brought the rover to Jezero,” said Morgan. “We’re working with engineers now to determine which path is most efficient and safest and most scientifically interesting.”

“And then we’ll arrive there at the front of the delta. From there, we’ll go and explore the delta, eventually winding up at the mouth of the river that once entered Jezero, where we will likely deposit our very first sample depot,” Morgan added.

Perseverance is the first mission to Mars specifically designed to look for evidence of past microbial life. It is equipped with a complex system to collect promising soil and rock samples and to deposit them on the surface for eventual retrieval and return to Earth using a combination of NASA and European Space Agency spacecraft.

On Thursday, NASA announced a contract with Northrop Grumman, valued at up to $84.5 million, to begin work on the propulsion system needed to launch the recovered samples into Mars orbit after their recovery by another NASA rover. The European Space Agency is designing a spacecraft to capture the samples toward the end of the decade and return them to Earth for detailed laboratory analysis.

“This is one for the ages for JPL and NASA,” Hogg said. “Even though it seems like a long time away, it’s going to pass in the blink of an eye, when we’ll be able to get these (samples) coming back to Earth for scientists all over the world to analyze.”